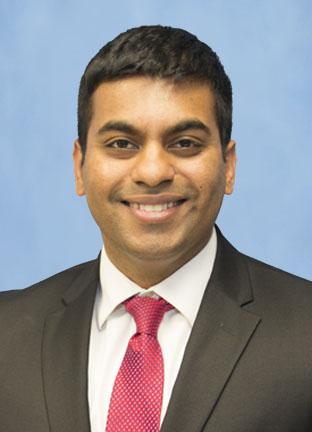 Sriganesh is a general surgery resident at Michigan Medicine. He completed his undergraduate studies in Biology (B.S., 2009) and Chemistry (B.S., 2009) at West Virginia University, where he graduated with honors. He subsequently completed his MD and PhD (Department of Biochemistry; Section of Cancer Cell Biology) at West Virginia University (Morgantown Campus) in 2017 and was inducted into Alpha Omega Alpha (AOA). His doctoral research focused on post-transcriptional regulation of RAS and effector pathway signaling in triple negative breast cancers and was important in describing non-redundant roles for mediators of RAS signaling in cells harboring mutant and wildtype RAS oncogenes. During his time as an MD-PhD student, Sriganesh was an active member in the American Physician Scientists Association (APSA).

Sriganesh was a post-doctoral fellow at the Conrad Jobst Vascular Laboratory under the mentorship of Dr. Andrea Obi and Dr. Peter Henke during his academic development time. His active projects focus on delineating the epigenetic regulation of innate cell signaling in mediating host responses after coronavirus infection and identifying targetable signaling pathways to curb COVID-associated coagulopathy (CAC) and macrophage activation syndrome (MAS). His work has earned recognition by the Fredrick A. Coller Surgical Society, the American Academy of Immunology, the International Society of Thrombosis and Hemostasis, and the Society of Vascular Surgery. Sriganesh hopes to further study the immunobiology of pulmonary thromboembolic disease and thoracic cancer cell signaling and is an aspiring cardiothoracic surgeon-basic scientist.

In addition to his basic science research interests, Sriganesh is also very interested in studying resident wellness, culture, and burnout. He will start his position as the Resident Director of Wellness for the Department of Surgery in July of 2021.