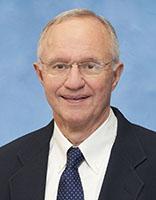 James E. Montie received his M.D. degree in 1971 from the University of Michigan.  He completed his urologic surgery residency at the Cleveland Clinic Foundation in 1976 and, after 2 years in the Air Force, proceeded to Memorial Sloan-Kettering Cancer Center in 1978 to study urologic oncology.  After stents at the Cleveland Clinic and Wayne State University, in 1995 he joined the University of Michigan with the rank of Professor of Surgery and was awarded the Valassis Professor of Urologic Oncology the following year.  He was promoted to Head of the Section of Urology in 1997 and was Founding Chairman of the Department of Urology in 2001, a position he held until 2007.  He was a co-principal investigator in the University of Michigan Specialized Program of Research Excellence (SPORE) in prostate cancer from 2000-2012.  He is a founding member and past president of the Society of Urologic Oncology, a member of the American Association of Genitourinary Surgeons and the Clinical Society of Genitourinary Surgeons.

In 2005, he established the Division of Health Services Research (HSR) in the Department of Urology at Michigan.  This has grown to be the largest and arguably most prominent Urologic HSR group in the world.  He is a founding Co-Director of the Michigan Urologic Surgery Improvement Collaborative (MUSIC), which has 240 participating urologists in the State of Michigan contributing prospective data on quality improvement interventions for prostate cancer care. There are now >50,000 patients in the population-based MUSIC registry since initiation in 2011.