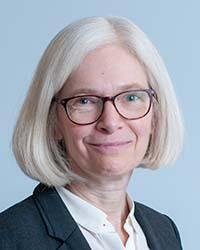 She joined the leadership team after serving as vice president for graduate medical education (GME) at Mass General Brigham in Boston. In this role, she was responsible for more than 300 GME programs with 2,400 residents and fellows, and led local and national initiatives focused on enhancing GME. She also was an associate professor of medicine at Harvard Medical School and a senior physician in Internal Medicine/Gastroenterology at Massachusetts General Hospital (MGH).

She graduated from Wellesley College, where she majored in music and conducted the college orchestra. After receiving her medical degree from Harvard Medical School, she completed clinical training in internal medicine and gastroenterology at MGH, was selected as chief resident, and served as associate chief and director of residency training in medicine prior to becoming the director of GME for MGH and the Brigham and Women’s hospitals and then vice president for GME for the Mass General Brigham (then “Partners”) health system. She also has been a trustee of the MGH Institute for Health Professions.

At Harvard Medical School, Weinstein contributed to key steering committees related to curriculum reform, the learning environment, LCME accreditation, continuing medical education and faculty affairs. Her scholarship has focused on GME innovation, and she is currently principal investigator of a $2 million “Reimagining Residency” grant from the American Medical Association focused on competency-based, time-variable GME. She served as deputy editor of Academic Medicine, chaired the oversight committees for the New England Journal of Medicine and the Journal of Graduate Medical Education, and is a member of the New England Journal’s Perspectives Advisory Board.

As a national medical education leader, she has served on the board of the Accreditation Council on Graduate Medical Education (ACGME), the Institute of Medicine’s Committee on Governance and Financing of GME, and as chair of the Association of American Medical Colleges’ Group on Resident Affairs. She chaired a Josiah Macy Jr. Foundation consensus conference on reforming GME, and organized and led a pair of workshops hosted by the National Academies of Science, Engineering and Medicine focused on harnessing medical education data to improve outcomes.

She was a 2006-07 American Council on Education Fellow, and is a recipient of the ACGME’s Parker Palmer Courage to Lead Award and John C. Gienapp Award — the organization’s highest honor.