BMA executive board members Rachel O’Reggio and Donovan Inniss, both M1s, led the effort to get the Michigan Medicine community engaged and working toward dismantling systemic racism; they felt that “the time is now” to make their voices heard 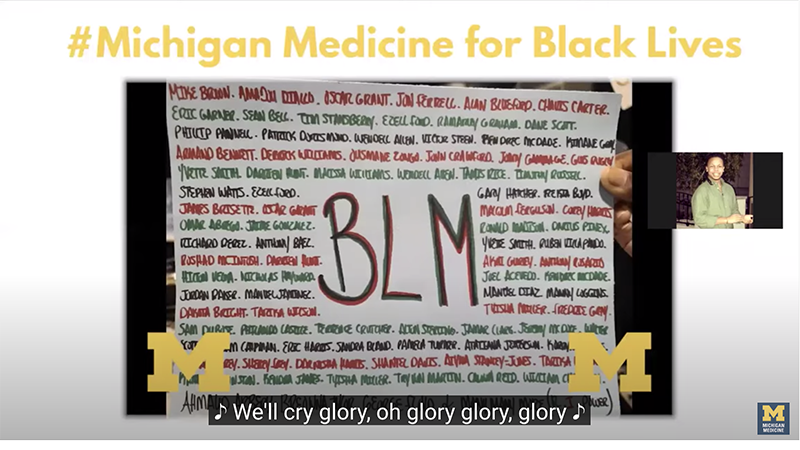 On June 5, more than 1,400 Michigan Medicine faculty, staff and learners participated in a virtual peaceful protest hosted by the Black Medical Association (BMA), an event organizers say signifies the beginning of initiatives, education, and changes to come in the fight against racism and racial injustice.

BMA executive board members Rachel O’Reggio and Donovan Inniss, both M1s, led the effort to get the Michigan Medicine community engaged and working toward dismantling systemic racism. They felt that “the time is now” to make their voices heard. A recording of the protest can be viewed by clicking on the image above, or by visiting: https://youtu.be/soL-VjJPxqA.

“We are appreciative of the support our Michigan family has shown,” said O’Reggio, BMA president. “We are grateful for those who shared their stories and hopefully caught the ears of allies and allies-to-be. We thank them for exemplifying bravery, vulnerability and passion, and for lending their voices to demand a change, ignite our morale, and provide the momentum to fight the structures and oppression that burden us. We must continue to push the needle forward, together, as change is on the horizon.”

Erika Newman, M.D., an associate professor of pediatric surgery, and Steven Gay, M.D., assistant dean of admissions and associate professor of internal medicine, co-read a poem that Inniss wrote, “We Call on You,” and delivered personal remarks surrounding the current climate of the country and the widespread changes they feel must be made to dismantle systemic racism. Danielle Jean, a M1, BMA e-board member and representative of the Action Committee, gave an overview of the work the group is doing to catalog current anti-racism and diversity, equity, and inclusion initiatives and to maximize collaborative efforts throughout Michigan Medicine to reduce redundancy, foster communication, and streamline the changes to be made.

Additional speakers reflected on George Floyd’s death, the days of protests that have followed, and any personal experiences they had with racism, including a specific negative event they considered racially motivated. They are:

As part of the protest, BMA encouraged members of the Michigan Medicine community to send photos of support with signs featuring the names George Floyd, Breonna Taylor, Ahmaud Arbery, Tamir Rice, Sandra Bland, Philando Castile, Tony McDade, or any other person who was wrongfully killed due to systemic racism. Signs also could include #WhiteCoatsForBlackLives or the sender’s profession joined with ForBlackLives (i.e. #NursesForBlackLives). By the end of the hour-plus protest, more than 1,400 photos had been uploaded; 600 are featured at the end of the video.

“We are grateful for those before us; those whose voices may have gone unheard; those who have already done this work and built the grounding for all of us to stand on,” said Inniss, co-chair of the Student Diversity Council. “In actuality, this protest is nothing novel — many have already screamed and cried and gone hoarse for the lives that were lost due to this unjust system.