Even before scientists understood what caused them, or developed drugs or vaccines for them, U-M offered advanced care for infectious diseases 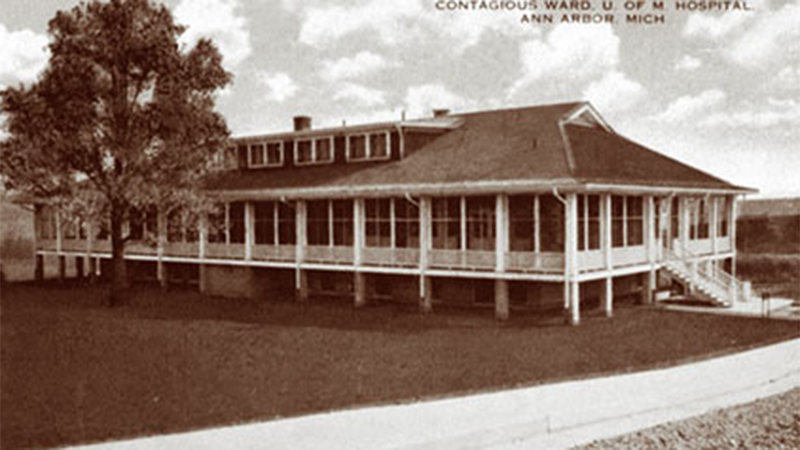 Right now in hospitals around the world, health care professionals taking care of patients with COVID-19 are going to great lengths to protect themselves and other patients from the coronavirus that causes the disease.

They might not realize it, but some of the techniques they’re using date back more than 100 years, when hospitals adopted the “aseptic technique” for inpatient care.

The idea that infections didn’t spread via some mysterious process in the air, but rather through contact with something that a sick person had touched, was still a novel one in the late 19th and early 20th centuries.

In fact, it was still called the “germ theory” of disease — because medical science hadn’t yet discovered the true causes of most infectious diseases and their complications, and medical professionals hadn’t yet understood their own role in transmitting disease.

Even though bacteria were being studied in research laboratories at the University of Michigan and elsewhere by the late 1800s, viruses were still years away from being seen and understood by anyone.

Not to mention the fact that antibiotics, antiviral medications and modern vaccines were decades away from being developed by university scientists and drug companies.

But the growing realization that touch could transfer disease helped drive new developments in hospitals for people with contagious illnesses in the early 20th century. It ushered in special processes that health care workers and trainees had to follow, and research showing that these steps could reduce disease.

Those changes are still considered “best practice” today: thorough hand-washing by clinicians as they moved between patients; covering the clothes of patient-care staff with a new gown every time they entered contagious patients’ rooms and taking it off when they left; and sterilizing or disposing of everything a contagious patient touches.

In August 1914, the University of Michigan opened its first facility designed specifically for this kind of care: a 24-bed Contagious Hospital, on the site where a main Medical School building now stands.

It had an ingenious design, created entirely for infection prevention. Each room held two patients, and had two doors: one that opened into a central hallway, for doctors, nurses, cleaning staff and medical trainees to pass through, and one that opened onto a porch that wrapped around the entire building.

The porch door allowed the patient’s bed to be wheeled through without passing other patients when they entered or left the hospital. It also allowed them to be taken out on the porch for some fresh air, which was considered to have healing properties. And large windows allowed medical students to stand on the porch as their professors discussed the care inside.

Read more about the U-M's historic role in stopping contagion in the Michigan Medicine Newsroom.

Stopping contagion with science: A look back (link is external)