He is a professor of neurosurgery, radiology, and otolaryngology-head and neck surgery in Medical School, and he also serves as surgical director of the Comprehensive Stroke Center 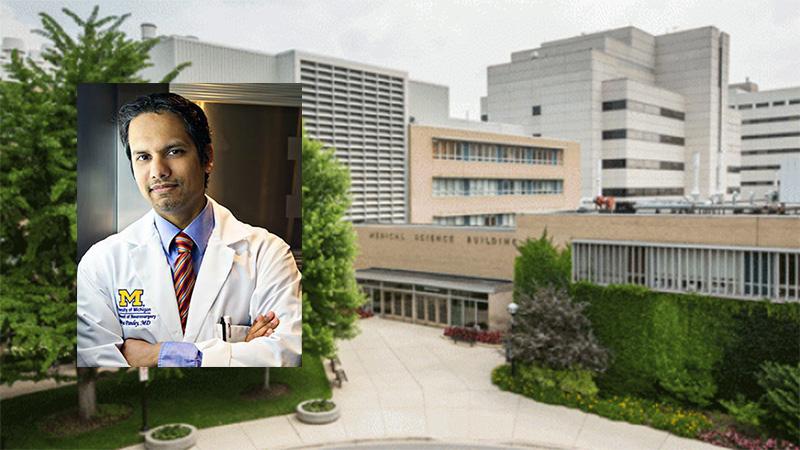 The University of Michigan Board of Regents today (June 16) approved the appointments of Aditya S. Pandey, M.D., as chair of the Department of Neurosurgery and the Julian T. Hoff, M.D., Professor of Neurosurgery in the Medical School, effective June 1, 2022.

After completing a Bachelor of Science in biological and engineering sciences at Washington University in St. Louis, he earned his medical degree from Case Western Reserve University. He then gained training in neurological surgery with sub-specialty training in microsurgical and endovascular treatment of cerebrovascular disorders at Thomas Jefferson University Hospital in Philadelphia.

He specializes in treating individuals who have blood vessel related diseases of the brain and spinal cord (e.g., aneurysms, AVM, stroke, fistulas, cavernomas, bleeding within the brain, etc.) as well as leading innovations with ultrasound and catheter-based technology for the treatment of ischemic and hemorrhagic stroke patient populations. He has co-led the formation of cerebrovascular centers at UMHW in Grand Rapids as well as in northern Michigan. He led the formation of the Michigan Endovascular Research Group (MERG), which aims to improve stroke care in the state of Michigan.

Pandey’s research interests include development of ultrasound technology for incisionless treatment of neurosurgical patient populations, understanding the role of CSF toxins in the development of post hemorrhagic hydrocephalus, and understanding opportunities of improvement of clinical outcomes of stroke patients through collaboration and large database analysis.

His collaborative research efforts have culminated in numerous innovations, more than 200 peer-reviewed publications, and grant support from the National Institutes of Health, American Heart Association (AHA), American Hydrocephalus Association, Joint Institute, the Joe Niekro Aneurysm Foundation, and the Focused Ultrasound Foundation. He serves as an associate editor for the AHA journal Stroke-Vascular and Interventional Neurology and as an editorial review board member for Operative Neurosurgery.