Prior to returning to Michigan, he spent his entire academic career at Stanford, most recently as the Sue and Bob McCollum Professor 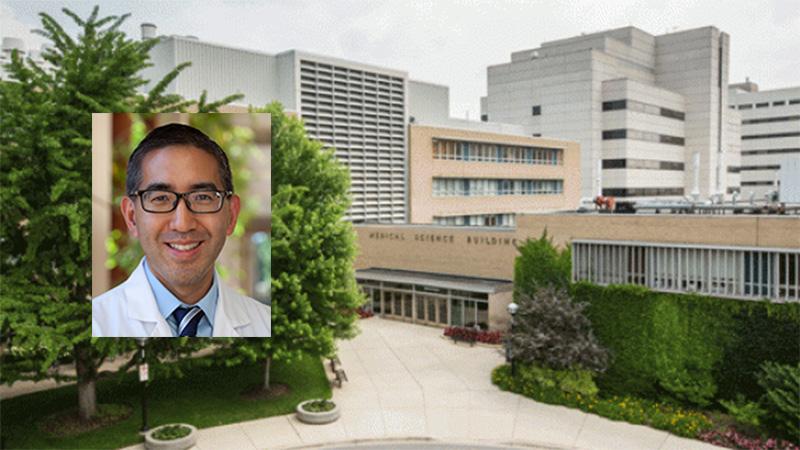 The University of Michigan Board of Regents today (September 22) approved the appointment of Daniel T. Chang, M.D., as chair of the Department of Radiation Oncology, professor of radiation oncology, and the Isadore Lampe Collegiate Professor in the Medical School, effective October 1, 2022.

Chang is the Sue and Bob McCollum Professor and vice chair for clinical operations in the Department of Radiation Oncology at Stanford University.

Prior to returning to Michigan, Chang spent his entire academic career at Stanford, where he started as an active assistant professor of radiation oncology in 2007. He ascended to associate professor in 2012, and the McCollum Professor in 2017.

Clinically, he specializes in the treatment of gastrointestinal malignancies. His research interest is in advanced radiotherapy techniques, primarily with stereotactic body radiotherapy (SBRT) for pancreatic and liver tumors, as well as SBRT for oligometastatic disease. He has led several studies investigating and establishing the efficacy and safety for SBRT. His other research interests include normal tissue tolerances, quality of life after radiotherapy, and combining radiotherapy with targeted agents.

During his time at Stanford, Chang has been actively engaged in education and dedicating himself to improving the training experience for residents. He served as the residency program director from 2012-17. He is recipient of the Henry S. Kaplan Memorial Prize for Teaching, the Golden Nugget Award, and the Richard T. Hoppe Leadership Award from the Stanford Department of Radiation Oncology. He also was named Educator of the Year by the Association of Residents in Radiation Oncology.

Since 2017, he has been the clinical operations director in radiation oncology at Stanford. He also has been engaged with bringing new innovative technologies to the clinic including PET-guided radiotherapy and overseeing the rollout of Stanford’s first MR-guided linear accelerator.