Zink is a professor of emergency medicine and senior associate dean for faculty and faculty development; Ailawadi, a former surgery resident at Michigan Medicine, returns to the U-M 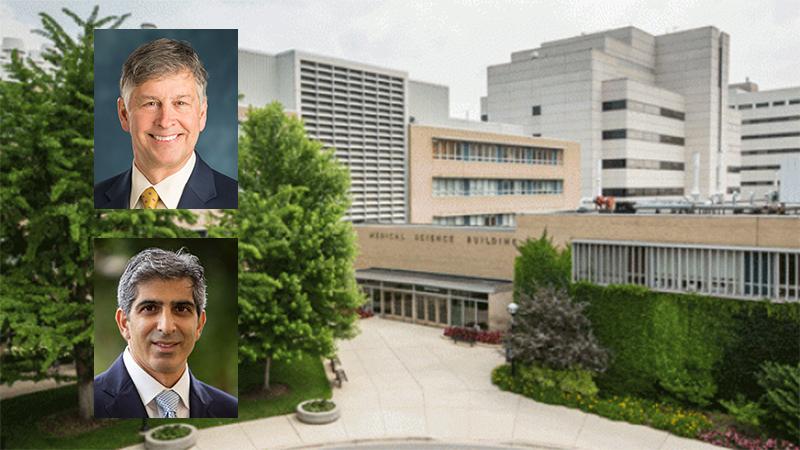 The University of Michigan Board of Regents today (Sept. 17) approved a pair of Medical School leadership appointments.

Zink (top) is a professor of emergency medicine, and since September 2019 he has served as senior associate dean for faculty and faculty development. He will continue in this role while working with Medical School senior leadership in administering our academic mission, which includes oversight and guidance for our learner population of medical and graduate students, and residents. He has extensive experience in mentoring, faculty and leadership development, education, medical humanities, history of emergency medicine, and current policymaking in health care.

After graduating from Allegheny College with a B.S. in biology, Zink earned his medical degree from the University of Rochester School of Medicine and Dentistry. He then completed a residency in emergency medicine at the University of Cincinnati Medical Center. He began his academic career in 1988 as an assistant professor of emergency medicine at Albany Medical College, and joined the U-M faculty in 1992 as an assistant professor of emergency medicine and founding member of the Department of Emergency Medicine. From 1992-2006, he was a researcher in brain injury and alcohol effects in trauma, and from 2004-06 he served as associate dean for student programs. During his first stint at the U-M, he wrote the first comprehensive history of U.S. emergency medicine, “Anyone, Anything, Anytime.”

He has served as president of the Society for Academic Emergency Medicine (SAEM) and Association of Academic Chairs of Emergency Medicine (AACEM), and he founded and is director of the SAEM/AACEM Chair Development Program. He received the Dean’s Award for Advancement of Women Faculty from the Alpert Medical School, Hal Jayne Academic Excellence Award and John Marx Leadership Award from SAEM, Outstanding Contribution in Education Award from the American College of Emergency Physicians, and Distinguished Service Award from AACEM.

Ailawadi (bottom), a former surgery resident at Michigan Medicine, returns to the U-M after serving as a professor of surgery and chief of cardiac and thoracic surgery at the University of Virginia. He held a joint appointment in biomedical engineering, and was director of minimally invasive cardiac surgery, surgical director of the UVA Advanced Cardiac Valve Center, and director of the Medical Device Innovation Center. He has expertise in minimally invasive cardiac surgery and percutaneous/transcatheter valve therapy, complex and redo heart surgery and surgery of the thoracic aorta.

He attended an accelerated honors program in medical education at Northwestern University, receiving his undergraduate degree in three years, followed by his medical degree in 1998. At NU, he received awards for best overall student and top surgical student. Additionally, he was elected to the Alpha Omega Alpha Honor Society.

While completing a surgery residency at Michigan, Ailawadi spent two research years investigating and understanding the development of aortic aneurysms. His work was recognized by the National Institutes of Health (NIH)/Lifeline Association and was chosen as the top research project in 2003. While at Michigan, he received the Top Resident and Young Investigator awards. He then completed his training in thoracic and cardiovascular surgery as chief resident at the University of Virginia. He joined the faculty there in 2007.

He was the first surgeon in the U.S. to perform hybrid AF ablation and the MitraClip procedure and the world’s first transcaval TEVAR procedure. He has performed more than 600 minimally invasive valve operations and roughly 4,000 heart operations. He is one of five principal investigators leading the Cardiothoracic Surgical Trials Network-linked research consortium (NIH), developing new trials in cardiac surgery. In addition, he is the surgical principal investigator for the Summit Trial investigating TENDYNE, a transcatheter mitral valve replacement without stopping the heart.

Ailawadi’s NIH-funded research laboratory studies new treatments for aortic aneurysms. He has been the principal investigator for a novel clip on the left atrium of the heart to try to prevent strokes associated with open-heart surgery. He has published more than 300 peer-reviewed manuscripts in journals, including the New England Journal of Medicine, Circulation, and the Journal of the American College of Cardiology.