Long before yearbooks or social media, college and professional school graduates carved their signatures on ceremonial canes to forever remember each other’s friendship 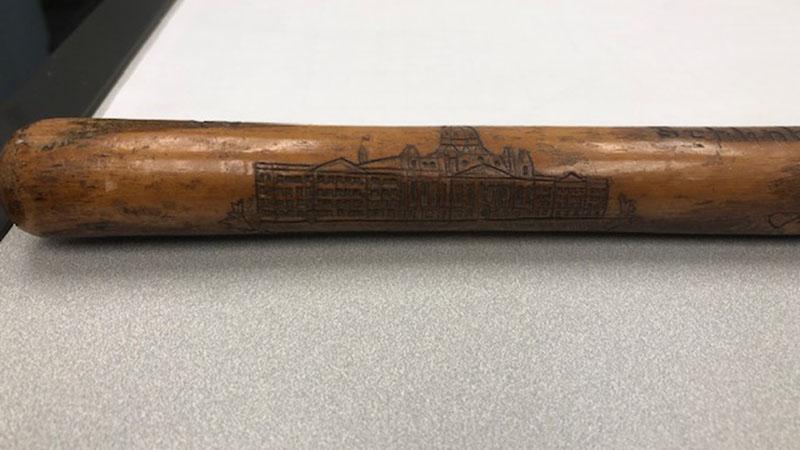 Dust off an old elementary school or high school yearbook and thumb through the pages to read what your friends and classmates signed all those years ago:

The tradition of wishing departing classmates well at graduation is as old as school itself; although the practice these days is very different than what occurred in the early years of U-M’s health professional schools.

Long before yearbooks or social media, college and professional school graduates carved their signatures on ceremonial canes to forever remember each other’s friendship. Canes have long symbolized the twin powers of maturity and wisdom, and several pieces acquired from Michigan alumni have been preserved by the Bentley Historical Library.

Now, a new exhibit on the fourth floor of the A. Alfred Taubman Health Sciences Library, “Three Graduation Canes from Early Health-related Professional Schools at the University of Michigan in the 1880s,” provides a glimpse into this grand tradition.

A glass case on the fourth floor houses three canes from U-M graduates. One belonged to Sidney Hollister Culver, who graduated from the medical school in 1884. In addition to some sparkling illustrations, including an egret in a marsh, the cane contains the carved signature of W. J. Mayo, co-founder of today’s Mayo Clinic. Culver went on to a long and successful practice in Mason, Michigan.

Also in the case are the canes of Joseph F. Geisler, who graduated from the College of Pharmacy in 1880, and William H. Hall, an 1883 Dental School graduate. Both canes boast intricately carved impressions of University Hall, which served as a grand centerpiece of the U-M campus.

Although no graduates signed “H.A.G.S.” to the three exhibited canes, their sentiments are forever preserved in Michigan history.

“Our medical school, and those of our fellow health professions at the U-M, enjoy rich traditions that tell the stories of Michigan doctors, scientists and scholars that walked our hallowed halls,” says Joseph C. Kolars, M.D., senior associate dean for education and global initiatives, and the Josiah Macy Jr. Professor of Health Professions Education. “We are pleased to showcase these significant historical items and connect them to the names and faces of our alumni who went forth to represent Michigan and become leaders in their fields.”