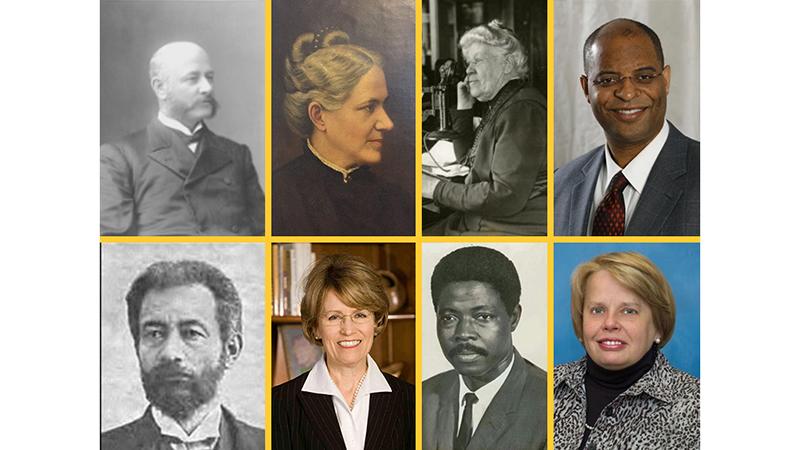 U-M and Michigan Medicine have a long-standing history of milestones and “firsts.” This Black History Month, the organization is celebrating these milestones — and all who have blazed a trail of excellence in patient care, education and research.

Dating back more than 160 years, here’s a closer look at a who’s who of some of the most notable diversity-related milestones within the institution:

1870: Madelon Louisa Stockwell is the first woman admitted to the university; she graduated in 1872 (literature).

1871: Amanda Sanford becomes the first woman alumna of U-M by graduating from the medical school (her grades were the highest of the 90 students). Sarah Killgore of Crawfordsville, Indiana, graduated with a law degree on the same day.

1877: José Celso Barbosa, the first Puerto Rican student, enrolls at U-M in the Department of Medicine and Surgery.

1878: Grace Roberts becomes the first African-American to receive an M.D. from Michigan.

1879: The first sorority, the Eta chapter of Kappa Alpha Theta, is established at U-M.

1885: Sophia Bethena Jones is the first woman to graduate from the medical school.

1890: The Women’s League is established for women students, alumni and faculty; the Michigan League building is dedicated in 1929.

1902: Barbour Gymnasium, a facility specifically for women, is completed. That same year, the Association for Mutual Aid of Colored Students is established.

1936: The International Center is created with J. Raleigh Nelson named its first director.

1954: Latunde Odeku, the first African-American neurosurgeon trained in the U.S. and Africa’s first neurosurgeon, begins his neurosurgical residency at U-M. He completes it in 1960.

1963: Coed dormitories are approved beginning with the Fall term, and a single director of residence halls is appointed to administer both men’s and women’s housing.

1968: Barbara Newell is appointed the acting vice president of Student Affairs. She is the first woman to serve as an executive officer of the university.

1970: The Center for Afro-American and Africa Studies is launched.

1972: Henry Johnson is appointed as VP for Student Services, the first African-American administrator.

1973: Intercollegiate varsity athletic programs for U-M women are established with the introduction of six varsity sports.

1990: University faculty members from psychiatry and the Center for the Study of Higher and Postsecondary Education conduct seminal research on diversity in higher education. This work is still ongoing 31 years later.

1993: The board of regents outlaws discrimination based on sexual orientation.

Click here for even more milestones. And do you notice anyone missing? The Office for Health Equity and Inclusion would like to keep this list as updated as possible. If you have anyone to add, please email medicinedei@umich.edu.