She will present “Reflections of a Gene Hunter: The Value of Mouse Genetics in an Era of Genomic Medicine,” at 4 p.m. Jan. 29 in the Rackham Hall Amphitheatre 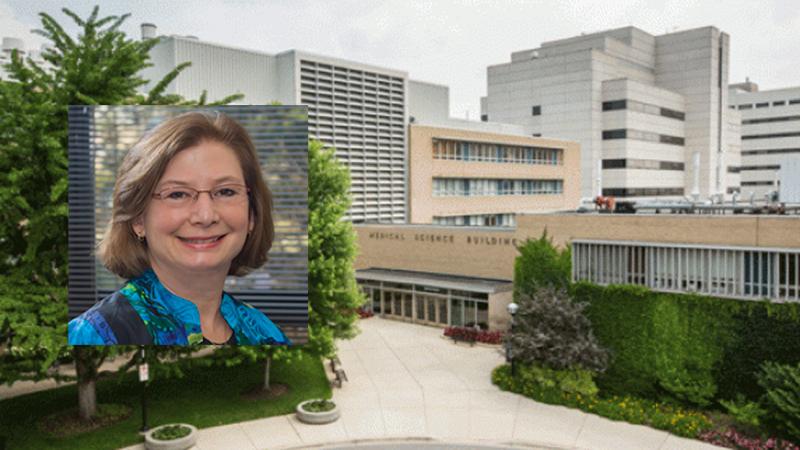 Sally A. Camper, Ph.D., has enjoyed many firsts during her long and successful tenure at the Medical School.

She arrived on campus in the late 1980s when few women were in the scientific realm, and found herself the only female in her graduate school class of biochemistry students. She went on to become the first woman to chair a basic science department at U-M, helming the Department of Human Genetics from 2005-15.

Camper will discuss major contributions that mouse geneticists have made to the understanding of genetics during the last century at her Distinguished University Professor lecture, “Reflections of a Gene Hunter: The Value of Mouse Genetics in an Era of Genomic Medicine,” at 4 p.m. Tuesday in the Rackham Hall Amphitheatre.

She was named the Margery Shaw Distinguished University Professor of Human Genetics and Internal Medicine last year, one of the highest honors the U-M bestows on its faculty. Shaw was pioneering physician-scientist and first female member of the Department of Human Genetics who made seminal contributions to the field of biomedical ethics.

Last year, Camper celebrated the 30-year anniversary of the Transgenic Animal Model Core, which was new technology at the time of its creation but made genetic engineering in mice available to the U-M scientific community.

“I was told that it would be impossible for an assistant professor to accomplish that, but I did it and it made a new research approach feasible for many faculty at the University of Michigan,” she said. “It was hard to learn, but I was committed to making the technology available to everyone.”

Recognized internationally for her research on the genetics of birth defects, especially neuroendocrine, hearing and skeletal developmental disorders, Camper has facilitated studies with human patients and genetically modified mice that have revealed genetic causes of disease and pathophysiological mechanisms.

Her most highly cited work in the pituitary field includes contributions to understanding the roles of transcription factors and signaling pathways in pituitary development and function.

After completing a postdoctoral fellowship at Princeton University in 1988, Camper came to Michigan and began her scientific pursuits hunting for genes that caused pituitary hormone deficiency in mice, and later broadened her search to include a caudal developmental defect (spina bifida), a congenital deafness and balance disorder, and a neurological defect (startle epilepsy).

“Since the genome sequence wasn’t available, we had to do a lot of work to map genes and create physical and genetic maps,” she said. “Now, it is feasible to sequence the genome of an individual patient and their parents.”

Camper is involved in an international collaboration in which a team of scientists are using DNA sequencing to search for the causes of hormone deficiency in children.

“I really like learning new things and discovering how a gene regulates a developmental process,” said Camper, a professor of human genetics and internal medicine, who has received research awards from the Endocrine Society and National Institutes of Health. “Most recently, we identified genes that cause two different types of skeletal dysplasia.”