With the newest medical school class now on campus, current first-generation students offer words of wisdom to their fellow learners 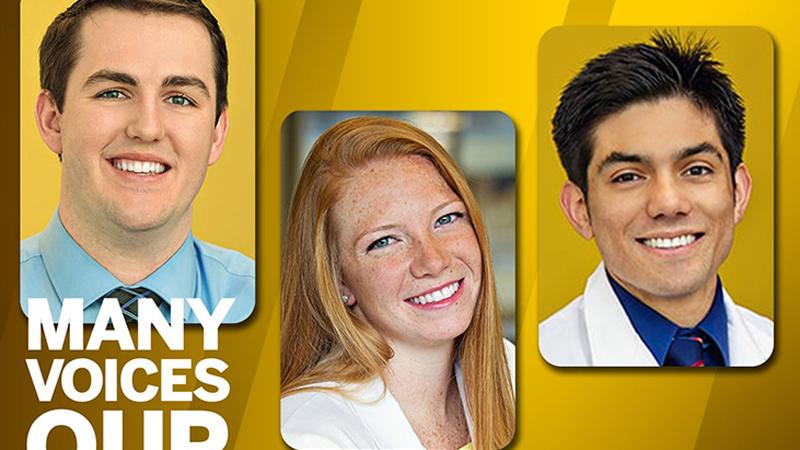 Juan Caceres learned the value of hard work from a young age. After emigrating with his parents from their native Colombia at age 6, the family elders held multiple service-industry jobs to make ends meet.

His mother and father both had completed some college, but the foreign credits were invalid in Florida, where the couple settled. Still, they nurtured their child’s education and encouraged him to dream big. But the Caceres family knew little about the application process — insight that some teenagers might take for granted.

“Nobody had any idea how to figure out all the obstacles,” said Caceres, now 23 and a rising M2 at the U-M Medical School. “I didn’t learn about the SAT until my junior year of high school.”

And that was just for undergraduate education, not the far bigger challenge of medical school.

Nicole Honey faced a knowledge gap when preparing for that next step after college graduation. She recalled telling her mother, a business owner who grew up on a Native American reservation in the Upper Peninsula of Michigan, of her apprehensiveness about spending the next decade in training to become a doctor.

“I didn’t know any physicians other than my pediatrician,” said Honey, 25, also a rising M2 at U-M.

From a town of 900 in rural Montana, Bridger Rodoni had a similar experience. His family, though wholly supportive, couldn’t advise him. It didn’t stop Rodoni and other first-generation peers at U-M from sharing a similar sentiment: With hard work and the help of others, you can succeed.

“Medical school definitely wasn’t a situation where the finances or my background or anything else was going to keep me out,” said the 23-year-old Rodoni, who will be starting his M2 year in September.

Caceres, Honey and Rodoni spoke recently about their experiences. Read their advice to fellow first-generation students in Michigan Medicine Headlines:

Diversity Matters: Advice from first-generation college students who made it to medical school (link is external)