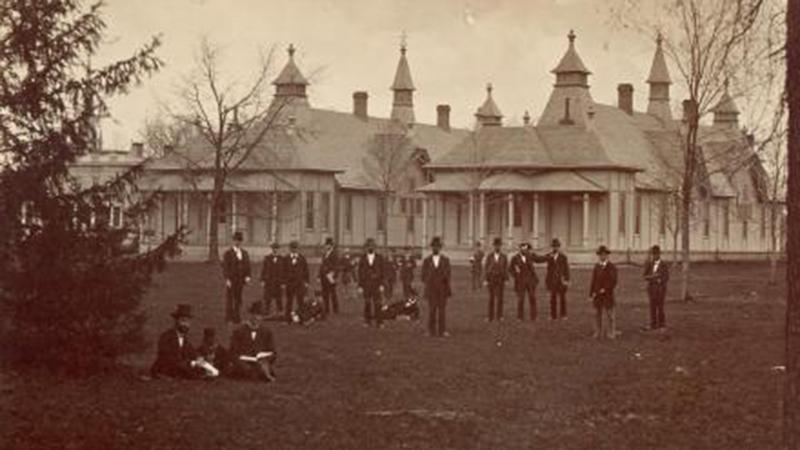 These “pavilions” were added to the original U-M hospital in 1876, just after the hiring of the first “house physician” to provide in-hospital care for patients who had come for treatment by the Medical School faculty

Every July, a new crop of recent medical school graduates arrives at teaching hospitals nationwide — including hundreds at Michigan Medicine.

They become part of what’s called the “house staff,” taking part in the care of patients while learning the particular field of medicine they’ve chosen to specialize in.

For their first year, they’re called “interns,” and after that “residents” or “house officers.” These terms roll off the tongues of everyone in an academic medical center without much thought.

But all those terms once had a very literal meaning at the University of Michigan’s hospitals, and many other medical centers that date back to the late 1800s and early 1900s.

That’s because the young physicians were actually required to live at the hospital — taking up residence in or near the building where they practiced. And at U-M, where the first hospital was in a converted house, the very first resident physicians were truly “house officers.”

When U-M opened the nation’s first university-owned hospital in this converted professor's house in 1869, no physicians actually saw the patients who stayed there. Instead, the Medical School faculty would examine or operate on patients in front of the medical students in the school’s main building, across the field now known as the Diag.

A steward named John Carrington was hired to oversee the hospital building, and his wife served as matron. Together they checked patients in, made sure they were fed and had clean linens and well-tended fires in the winter, and charged them room and board. The medical care was free.

But by 1874, the faculty recognized the need for a physician to examine patients as they arrived, and provide care during their stay. The Regents set forth the duties of a new type of employee called a “hospital physician” as follows:

“Examine patients as they arrive, assign them quarters after they have paid the admission fee, and notify the physician to whose department they belong.

See that they receive proper food and that accurate record is kept of the treatment of each case. Dispense all the medicine himself and charge regular drug store prices, and charge for all dressings.

See that the hospital is kept in a comfortable and cleanly condition, shall prevent persons not belonging in the hospital from lounging in the building, and promptly report any irregularities occurring therein.”

They authorized the hiring of Robert J. Peare, M.D., an Irish immigrant who had graduated from the Medical School in 1869, as the first Hospital Physician. He oversaw the care of the 185 patients who stayed in the hospital – often for weeks at a time — when the hospital was open from October to July of his first year.

By 1876, a large addition to the hospital opened, called the Pavilion Hospital, and the first nurses were hired to work with this first resident physician and faculty.

As more and more patients sought care from U-M physicians, the Regents in 1877 authorized the hiring of one of the Medical School’s newest graduates, Alexander Maclean, M.D., as the first Hospital Surgeon.

Maclean even had a role in getting out the word that the hospital had expanded and had room for patients.

In advertisements starting in 1878 in the Michigan Medical News, a statewide journal, he wrote that “great improvements have been made in the equipment and accommodations of the Hospital so that every provision has been secured for the comfort and treatment of the sick and afflicted.”

He also explained in the ads that the resident physician would be available at the hospital to examine and treat patients arriving during the nine months of the year that the hospital was open. The exception: those arriving on Wednesday and Saturday mornings were encouraged to go directly to the Medical School building on East University Avenue, to be examined and treated by faculty during their clinic hours.

Maclean especially called for the supervisors of “county houses” — facilities set up for the care of the poor in each Michigan county – to send patients to this “well equipped public hospital” rather than allowing them to languish or die where they were.

Despite their usefulness in this advertising campaign, historical accounts say that house physicians in these early years were “essential to the proper conduct of a hospital, (but) for many years they occupied an inferior position and were more or less looked down upon by the hospital chiefs.”

Read more about the history of medical interns and residents at Michigan Medicine in the Department of Communication newsroom.

Doctors in the house: History of medical interns and residents at U-M hospitals (link is external)