Bove elevated cardiac surgery from a division to a department, and has facilitated substantial growth in all clinical areas 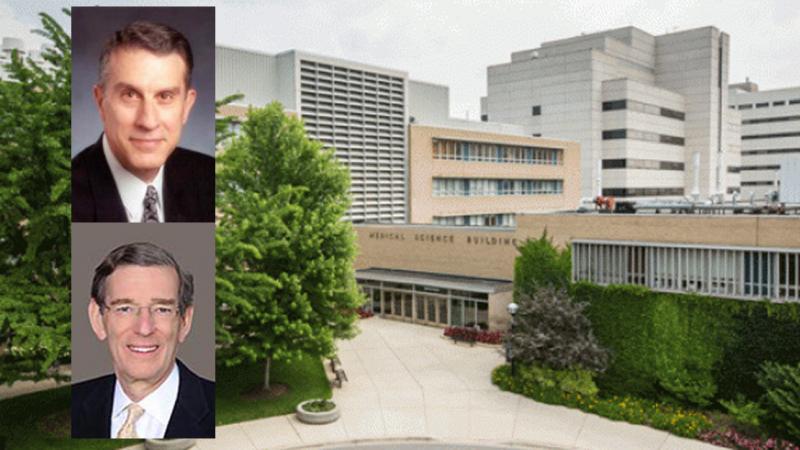 Edward L. Bove, M.D., will be stepping down as chair of the Department of Cardiac Surgery on Feb. 19.

Bove, top, became the inaugural chair in 2012, after various leadership roles in cardiac surgery. Under his leadership, he elevated cardiac surgery from a division to a department, and has facilitated substantial growth in all clinical areas. He also launched robust research programs in stem cell and outcomes research, and established an integrated six-year residency program.

The department is also recognized for its nationally and internationally renowned faculty, including Bove’s work pioneering heart surgery for children with congenital heart disease.

As the organization prepares to launch its search for a permanent replacement, Richard L. Prager, M.D., has been appointed interim chair for the Department of Cardiac Surgery, effective Feb. 19.

Prager, bottom, has served as the director of the Frankel Cardiovascular Center since 2003 and was program director of the Thoracic Residency Program from 2009-15. He also serves on the executive committee and board of directors for the Society of Thoracic Surgeons. His research focuses on acquired heart disease, health outcomes research, patient safety, organizational efficiencies and education.

Prager received his M.D. from the State University of New York, Downstate Medical Center. After completing a general surgery and thoracic residency at U-M, he joined Vanderbilt University as an assistant professor in the Department of Surgery. Prager returned to U-M in 1984 as a clinical associate professor in the Section of Thoracic Surgery and director of the Adult Cardiac Division. He was promoted to clinical professor of cardiac surgery in 1999.