The group was recognized for their contributions to a broad range of topics, including cardiovascular disease, epidemiology, hepatology, health inequities, and anesthesiology informatics and clinical research 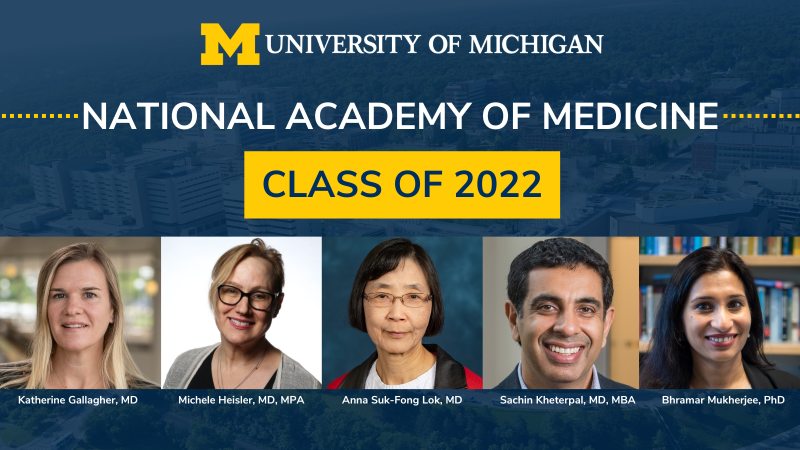 Earlier today, five University of Michigan professors were elected to the National Academy of Medicine, or the NAM, the highest honorary society in the country for researchers in the fields of health and medicine.

The prestigious group was recognized for their contributions to a broad range of topics, including cardiovascular disease, epidemiology, hepatology, health inequities, and anesthesiology informatics and clinical research.

Katherine A. Gallagher (left), professor of surgery and microbiology and immunology and the John R. Pfeifer Professor of Surgery at the U-M, has been elected to the NAM for her innovative translational research on epigenetic regulation of immune cells during normal and pathologic tissue repair and other cardiovascular disease processes.

Gallagher is also the vice chair of Basic and Translational Science and an exceptionally well-funded researcher supported by multiple R01s and other foundational grants, including the Doris Duke Charitable Foundation and Wylie Scholars, amongst others. Her high-impact work has appeared in prominent journals such as Immunity, Journal of Experimental Medicine and Proceedings of the National Academy of Sciences. She is an expert in the molecular pathogenesis of wound repair and has contributed substantially to the understanding of epigenetics in immune cells associated with tissue repair, cardiovascular diseases, sepsis and most recently, COVID-19.

Training the next generation of scientists most excites Gallagher, where her mentees have successfully obtained NIH grant funding and numerous awards. For her mentoring, she received the 2022 MICHR Basic/Translational mentor of the year award. She is currently the chair of the Bioengineering, Technology, and Surgical Sciences NIH-study section and an original member on the NIH-National Institute of Diabetes and Digestive and Kidney Diseases Wound Consortium.

A drive to understand and address inequity in medical care and health outcomes, both within the U.S. and in low- and middle-income countries, has powered Michele Heisler’s (left middle) career as a physician, researcher, and global health and human rights advocate. She pursues these goals through her work with three organizations: as a U-M professor with appointments in both internal medicine at the Medical School and health behavior and health education at the School of Public Health; as a research investigator with the VA Ann Arbor Healthcare System; and as medical director of the nonprofit health and human rights organization Physicians for Human Rights.

Heisler's innovative clinical trials and implementation studies have demonstrated the effectiveness of diverse peer support models — in which fellow patients, community members, and family members are trained to support patients -- to achieve sustained improvements in health and social wellbeing. She has worked with health systems and plans in the U.S. and overseas to implement these models. Over the course of her career, she has also gained international recognition for her research documenting health consequences of human rights violations and her work conducting and promoting rigorous medico-legal evaluations to document, prosecute, and prevent torture, violence, and discrimination against marginalized groups.

Throughout her career, Heisler has mentored many other rising health care and global health researchers. For over a decade, she served as co-director of the Robert Wood Johnson Foundation Clinical Scholars program and its successor, the National Clinician Scholars Program, at the U-M Institute for Healthcare Policy and Innovation, which trains clinicians in health services and health policy research. She continues as associate director of Global REACH, which supports and facilitates global health activities among Medical School faculty, trainees, and students. And she is a research investigator at the VA Center for Clinical Management Research, where her work led to the 2020 national VA Outstanding Mentor award for her research mentorship.

Her career began in the global public policy and human rights realm, with a focus on Latin America and the Caribbean. Upon graduation from Amherst College, after a year in Brazil on a Thomas J. Watson Fellowship, she pursued a master’s degree in public affairs from Princeton University.

In the months before starting medical school at Harvard University she worked as a field investigator to assist the United Nations Truth Commission on El Salvador. She completed residency and health services research training as a RWJF Clinical Scholar at U-M.

She has authored more than 275 peer-reviewed studies in medical and public health journals and is an elected member of the Association of American Physicians.

Sachin Kheterpal (middle) the Kevin K. Tremper Research Professor in the Department of Anesthesiology, was elected to the NAM in recognition of his vision for and international leadership in anesthesiology informatics and clinical research.

Kheterpal’s career has focused on the use of novel information technology and electronic health records (EHR) for patient care, quality improvement and research. Prior to his academic medicine career, he was the lead architect for a commercially available acute care electronic health record used by hospitals across the U.S. Using innovative techniques to integrate administrative, EHR, and registry data across institutions, he established the Multicenter Perioperative Outcomes Group, or MPOG, in 2008 and serves as its principal investigator. Today, MPOG has accumulated more than 16 million patient records with risk-adjusted long-term outcome data and detailed clinical intervention data spanning more than 50 hospitals across dozens of states and multiple countries for outcomes research and quality improvement.

Most recently, he is the principal investigator a $30 million PCORI-funded pragmatic large comparative effectiveness trial, THRIVE (Trajectories of Recovery after Intravenous Propofol versus inhaled VolatilE anesthesia), which will enroll 12,500 patients in a prospective, randomized controlled trial across 20 MPOG clinical sites. His leadership of MPOG has transformed the field through international epidemiologic studies, national personalized quality improvement implementation, pragmatic clinical trials and data science.

His research and quality improvement efforts have been funded through various industry sponsors, including Blue Cross Blue Shield of Michigan, the National Institutes of Health and the Patient Centered Outcomes Research Institute.

Nationally, Kheterpal has served as a member of the NIH Precision Medicine Initiative Advisory Panel, the NIH Council of Councils, and is co-chairing NIH’s Novel and Exceptional Technology and Research Advisory Committee working group on data science. In 2013, he was named the recipient of the American Society of Anesthesiologists (ASA) Presidential Scholar Award, which annually recognizes an ASA member who has dedicated their formative career to research.

Kheterpal received his Bachelor of Science, Doctor of Medicine and Master of Business Administration degrees from the U-M. He also completed an anesthesiology residency and transplant anesthesia fellowship at the same university.

Anna Suk-Fong Lok (right middle) was inducted to the NAM for conducting the first systematic study on hepatitis B reactivation among patients receiving chemotherapy. She was a key investigator in interferon and nucleos/tide analogue trials leading to their approval for hepatitis B. She led the first study demonstrating that hepatitis C can be cured by orally administered direct-acting antiviral drugs.

Lok received the prestigious American Gastroenterological Association (AGA) William Beaumont Prize in Gastroenterology in 2016 for her outstanding and substantial work in clinical hepatology. She is considered one of the most outstanding clinical investigators in the study of hepatitis B, or HBV, and has contributed to all major HBV-related issues, including epidemiology, prevention and treatment.

Lok has also made crucial contributions to hepatitis C research, demonstrating that it is possible to cure hepatitis C with interferon-free regimens using a combination of direct-acting antiviral agents. These incredible accomplishments, along with her remarkable energy as a clinician, teacher and mentor, make Lok’s lifelong contributions so significant. Lok’s biggest pride is the success of her mentees. Her dedication to mentoring was honored by a MICHR Distinguished Mentor Award in 2012 and the AGA Distinguished Mentor Award in 2022.

Lok is currently the Alice Lohrman Andrews Research Professor of Hepatology, director of the hepatology program and assistant dean for clinical research at U-M. She was honored by her alma mater with a Doctor of Science in 2017 and by the U-M with a Distinguished University Professorship in 2019. Ever committed to her field, Lok takes part in several organizations to help impact the community at large. She received the American Association for the Study of Liver Diseases (AASLD) Distinguished Service Award in 2011 and became AASLD President in 2017.

Lok has published over 600 peer-reviewed articles. She co-authored every iteration of the AASLD guidelines on hepatitis B, which are widely used by physicians all over the world and was tapped by the World Health Organization to serve on the guideline development panels for hepatitis C and hepatitis B in 2014 and 2015.

Only one year after migrating to the U.S., Lok received her first federal grant funding and has been continuously funded by the Department of Veteran’s Affairs and/or NIH ever since.

Mukherjee's research focuses on the development and application of statistical methods in epidemiology, environmental health, cancer research and disease risk assessment. She has authored more than 340 publications in statistics, biostatistics, epidemiology and medical journals and has led several impactful extramural grants as a principal investigator from both the NSF and the NIH.

Mukherjee is known for her pioneering contributions in developing analytical frameworks for integrating data from genes, environment and past disease phenotypes towards improved understanding of disease etiology and future risk, often using observational data sources like electronic health records. Since the beginning of the COVID-19 pandemic, Mukherjee and her team have been modeling the SARS-CoV-2 virus trajectory in India and their work has been covered widely by national and international media.

Mukherjee is a research professor and core faculty member for the Michigan Institute of Data Science (MIDAS). She serves as the associate director for quantitative data sciences at the U-M Rogel Cancer Center and served as the associate director of Cancer Control and Population Sciences at Rogel from 2015 to 2018. Mukherjee has had a longstanding collaboration with U-M’s Precision Health Initiative.

Dedicated to diversifying the statistical and data science workforce, Mukherjee has been leading a flagship undergraduate summer program in Big Data since 2015. This program has trained nearly 300 undergraduates, more than 60% of whom go on to pursue graduate school in a quantitative field.  She is also a fellow of the American Statistical Association and the American Association for the Advancement of Science. She is recipient of many awards, including the Janet Norwood Award and the Sarah Goddard Power award in 2021.

Mukherjee was born and raised in Kolkata, India. She earned a bachelor’s degree in statistics from Presidency College in Kolkata and a master’s degree in applied statistics and data analysis from the Indian Statistical Institute. She also holds master’s and doctoral degrees in statistics from Purdue University. In her own words, she has always been a “data dreamer” and aspired to improve human health by deeper understanding and interrogation of complex data.