A participant in the Medical School’s Global Health & Disparities (GHD) Path of Excellence, Sarah Bell sought opportunities to round out an impressive resumé of international experience 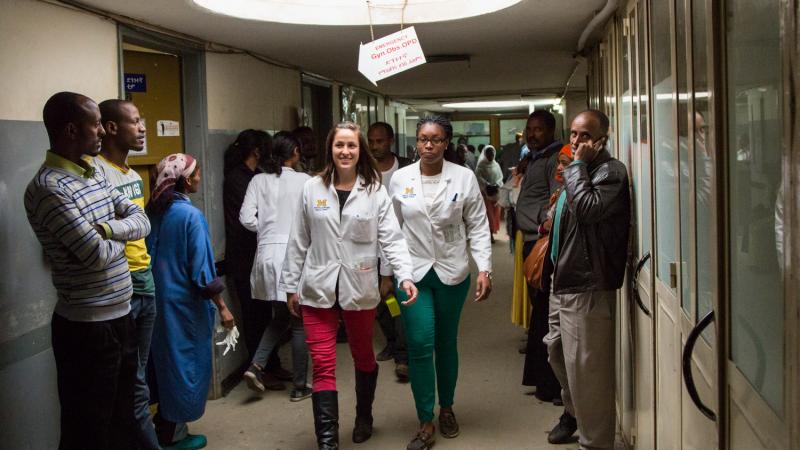 The 2017 University of  Michigan Medical School graduate, a participant in the medical school’s unique Global Health & Disparities (GHD) Path of Excellence, sought opportunities as a student to round out an impressive résumé of international experience. Her extensive work abroad on women’s health issues, from working with a non-profit in South Africa to conducting healthcare research in Zambia, earned Sarah the OB-GYN department’s 2017 Warner/Goldberg Women’s Health Program Award and a residency with the department starting this summer.

“Sarah has been a rock star. She’s already demonstrated a strong commitment to global and women’s health issues and she’s shown in each step how she’ll move to the next level with regard to women’s health,” said Assistant Professor of OB-GYN Jason Bell, M.D., MPH, M.S., Sarah’s GHD faculty mentor. (The two are not related.) “We are thrilled to have her join our department for residency.”

Drawn early on to global health and international work, Sarah’s award-winning undergraduate thesis at Wesleyan University contrasted the spread of HIV/AIDS in South Africa and Uganda. After graduation, she moved for a year to South Africa to work with Grassroot Soccer, a non-profit that combines athletics and education to improve adolescent health in developing countries. Next came a three-month stint in South Sudan coordinating traditional birth attendant training for Massachusetts General Hospital’s global health unit. Those experiences ultimately led to UMMS and the GHD program.

“Global health offerings played a big a role in why I wanted to come to U-M for medical school,” Sarah said. “I knew there would be lots of opportunities for global health scholarship, which is something I was very interested in.”

After enrolling, she sought out Jason Bell as a mentor and opted into the UMMS GHD Path program, which connects students with opportunities to pursue health disparities in the field, domestically or abroad. She twice visited Africa as a medical student for university-supported research experiences. As an M2, Sarah embarked on a summer research project in Ethiopia, studying the viability of point-of-care testing for sexually transmitted diseases in the St. Paul’s Hospital Millennium Medical College in Addis Ababa. She returned to Africa as an M4, traveling this time to Zambia to research healthcare access barriers among women, a project in partnership with Population Council, a global NGO.

“That was a full-circle experience for me. Previously, I had worked with traditional birth attendants who delivered babies in South Sudan. We would have long conversations about the reasons for maternal and child mortality and brainstorm ways to overcome some of these challenges,” Sarah said. “So it was nice to follow through and actually study some of those issues from a more academic, research perspective.”

For those keeping track, that’s four different extended visits to four different countries in a variety of settings – clinical and research, hospitals and non-profits – all before earning her MD. That body of work is why Sarah was selected by OB-GYN Department leaders for the Warner/Goldberg Women’s Health Program Award for Excellence and Commitment to Women’s Health during the 2017 UMMS graduation commencement.

“That breadth of experience this early in one’s career shows a longitudinal interest,” said Jason Bell. “She’s been able to apply her passion for global health work to every stage of her academic career. That kind of longstanding dedication is exactly what it takes to make a lasting impact in this kind of work.”

Sarah was among 20 GHD Path students to graduate from UMMS on May 12. And she isn’t done with Ann Arbor yet, as she begins orientation for her OB-GYN residency this month.

“The department does so much international work, so I am definitely really grateful to be staying at U-M for four more years,” she said. “There are awesome mentors that I can continue to work with and, while residency is a busy time, I’m hoping for the opportunity to stay involved in global health.”