Hanson is the Gerty T. Cori Professor in the Department of Cell Biology and Physiology at the Washington University School of Medicine; Gitlin is a professor of internal medicine in the Division of Hematology/Oncology at the U-M and the Ann Arbor VA Healthcare System 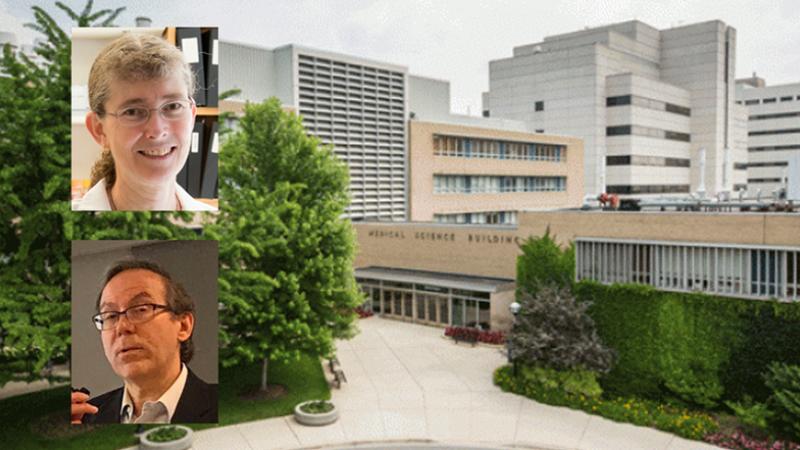 Hanson is the Gerty T. Cori Professor in the Department of Cell Biology and Physiology at the Washington University School of Medicine. She earned a B.A. in molecular biophysics and biochemistry from Yale University, and Ph.D. and M.D. from the Stanford University School of Medicine. She then completed a postdoctoral fellowship in the Department of Pharmacology at Yale. She joined the Washington University faculty in 1997 as an assistant professor of cell biology and physiology. She was promoted to associate professor in 2005, professor in 2010, and bestowed the Cori Professorship in 2016

Her research focuses on protein-protein and protein-membrane interactions involved in membrane trafficking and organelle structure. She has been recognized for her work on a family of enzymes known as AAA+ ATPases that change the shape of proteins and the membranes with which they are associated, and play vital roles in bending membranes to form and release small vesicles and viruses. Her research has led to insight into the pathogenesis of diseases that involve defects in membrane trafficking, including dystonia (a movement disorder in which muscles contract uncontrollably), neurodegenerative disease and cancer. Her current work is focused on a set of AAA+ ATPase substrates called ESCRTs that function in endolysosomal trafficking and membrane repair and is funded by the National Institute of General Medical Sciences and the National Institute of Aging.

Hanson is highly visible in the research community. She is an associate editor of the Journal of Biological Chemistry and a member of the American Society of Cell Biology, the American Society for Biochemistry and Molecular Biology, and the Hope Center for Neurological Disorders at Washington University. She recently served as chair of the National Institutes of Health (NIH) Membrane Biology and Protein Processing Study Section, and earlier as chair of the NIH Synapses, Cytoskeleton and Trafficking Study Section. Among her honors, she was a W.M. Keck Foundation Distinguished Young Scholar in Medical Research and also received Searle, McKnight and Sloan scholar awards. She was named a fellow of the American Association for the Advancement of Science in 2016, and will be serving as vice chair and then chair of the Gordon Research Conference on Lysosomes and Endocytosis.

Gitlin is a professor of internal medicine in the Division of Hematology/Oncology at the U-M and the Ann Arbor VA Healthcare System. He serves on the GME Internal Review/Annual Program Review Committee and on the medical school’s Competency Assessment Committee.

After earning a B.S. in chemistry and Lyman Briggs College from Michigan State University, and his M.D. from the University of Michigan, he completed an internship and residency in internal medicine, and fellowship in hematology/oncology, here. He also completed a postdoctoral fellowship at the National Cancer Institute/National Institutes of Health.

Gitlin has been honored with the Teacher of the Year Award from the Department of Internal Medicine Division of Hematology/Oncology, elected an honorary prefect for the Galen’s Medical Society, and is a member of the U-M Academy for Educational Excellence and Scholarship. He holds leadership positions at the Association of American Medical Colleges, including a seat on their board of directors, and is a member of the American Board of Internal Medicine Hematology Board.