COVID-19: Masks are required throughout all facilities. Limited visitation is permitted for hospitalized patients.

Doctors often care for people with disabilities, yet few physicians have one. Michigan recently altered its technical standards to better promote a longtime mission of inclusivity 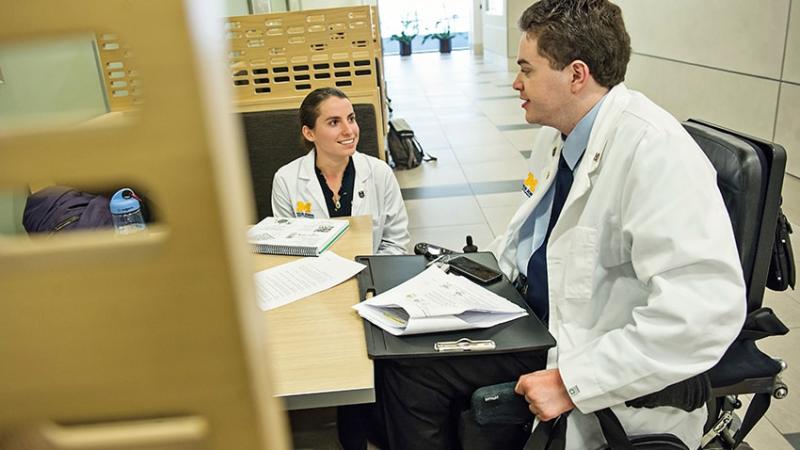 An injury from a water polo practice during his freshman year of high school left Chris Connolly a quadriplegic at age 15.

The Chicago native spent years regaining limited mobility in his arms and legs, skills he continued to sharpen while earning bachelor’s and master’s degrees at Stanford University.

“I now have pretty good handwriting — for a guy, I guess,” says Connolly, now 25. “And I’ve been doing a little bit of walking. It isn’t pretty. I’m not going to be a runway model anytime soon, but that’s OK.”

But when researching medical schools, Connolly discovered many programs had technical standards that require students to perform physical tasks such as CPR and lifting a patient. So despite his mental aptitude, he couldn’t enroll.

Technical standards vary by institution. Their purpose — to ensure a uniform set of attributes among enrollees — is universal. Such benchmarks, beyond motor skills, typically range from scientific acumen and problem-solving skills to the emotional capacity needed to interact with patients and hospital staff.

In many places, these standards have not changed since 1979, when the Association of American Medical Colleges (AAMC) issued recommendations for a universal skill set among applicants to ensure success in any specialty.

This has led to more recent debate over whether technical standards, even indirectly, exclude qualified candidates who have a disability.

At the University of Michigan Medical School, where Connolly started his first year in August, his limitations aren’t a deterrent. The school revised its technical standards in 2016 to include students with compromised physical function, as long as alternative or supplemental means can help them learn the hands-on coursework.

A Seat at the Table (link is external)