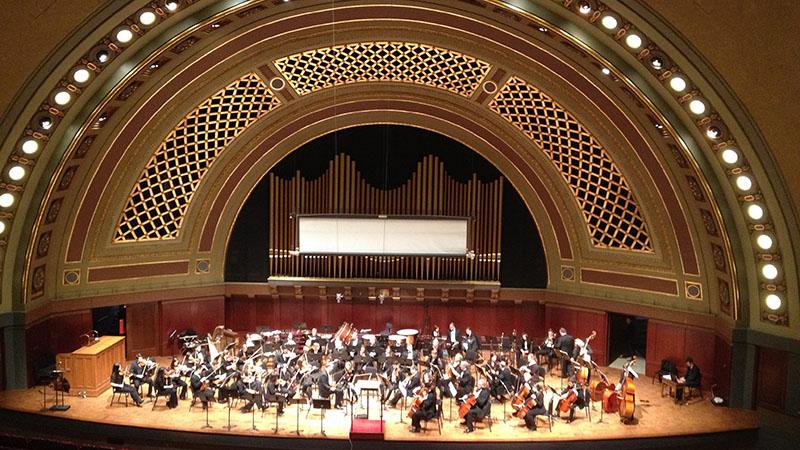 Nearly 20 years ago, a young surgeon had an idea: What if the University of Michigan’s vast medical and science community had its own orchestra, to give give students and professionals a chance to express their musical talents and connect with one another and the community?

On Sunday, April 14, that surgeon will appear with the orchestra he envisioned, as its featured flute soloist.

David J. Brown, M.D., will play Carl Nielsen’s Concerto for Flute and Orchestra with the U-M Life Sciences Orchestra, to close out the ensemble’s 19th season of blending science and music.

Beginning at 7 p.m. in U-M’s Hill Auditorium under the baton of music director Chelsea Gallo, the LSO will present a program of works composed in four centuries.

The concert is free and open to the public, as is a pre-concert lecture at 6:15 p.m. by Gallo in the lower level of the building. No tickets are required, though the LSO accepts donations to support its concerts.

The concert will begin with Helix, a short but intense overture by Finnish composer and conductor Esa-Pekka Salonen. Written in 2005, it brings out the mathematical side of music; the LSO will present its Michigan premiere.

The flute will come to the fore in two pieces: Mozart’s overture from The Magic Flute, written in 1791 and conducted by the LSO’s assistant conductor Régulo Stabilito, and the Nielsen concerto.

Written in 1926, the concerto offers Brown a chance to show the musical talent that made him co-winner of the LSO’s most recent concerto competition. He is also Associate Dean and Associate Vice President for Health Equity and Inclusion at Michigan Medicine, U-M’s academic medical center, as well as an associate professor of pediatric otolaryngology who cares for young patients at U-M’s C.S. Mott Children’s Hospital.

Brown first came to U-M in the late 1990s as a resident physician, and approached the health system’s Gifts of Art program with the idea of starting an orchestra like the one he had played in during his medical school years at Harvard University. The LSO launched in 2000 and played its first concert in January 2001. After leaving U-M for further training and his first faculty position, Brown returned in 2011 and rejoined the LSO soon after.

The concert’s second half features the Symphony No. 4 in F minor of Pyotr Ilyich Tchaikovsky, written in the late 1870s. With its opening brass fanfare symbolizing the hand of fate, its quotes from Russian folk music, and one movement that calls for string players to pluck their instruments rather than bow them, the piece draws on the talents of dozens of the LSO’s members. Nearly all of them are medical, health and science faculty, staff, students and alumni from across the university.

Gallo is a doctoral student, and Stabilito a master’s degree student, in the UM SMTD’s nationally known orchestral conducting program. Gallo holds the Gilbert S. Omenn, M.D. Music Director position with the LSO, made possible by a gift from its namesake, the first U-M executive vice president for medical affairs and a longtime supporter of the LSO. She is also a cover conductor with the Detroit Symphony Orchestra.

The orchestra is part of the Gifts of Art program, which brings the world of art and music to Michigan Medicine.