His new term was approved by the Board of Regents and will last from July 1 until June 30, 2025 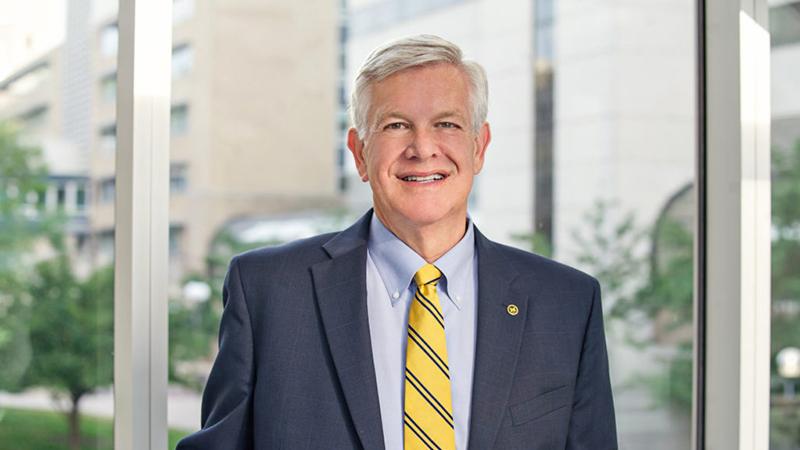 On June 20, Marschall S. Runge, M.D., Ph.D., was reappointed as executive vice president for medical affairs and dean of the U-M Medical School for a six-year term.

Runge’s new term was approved by the Board of Regents and will last from July 1 until June 30, 2025.

Runge began serving as executive vice president for medical affairs on March 1, 2015, and was appointed dean of the medical school on Jan. 1, 2016. He is the first person to serve in this combined position created by the regents for the purpose of strengthening the integration between the medical school and operations of Michigan Medicine’s hospitals and health centers.

During his tenure, Runge has implemented transformative change and has positioned the organization for continued success.

Notable achievements during this period include: a significant expansion of Michigan Medicine’s clinical network in the state with an affiliation with Metro Health and joint ventures with Trinity Health and Sparrow Health System; launch of the Precision Health Initiative, a major research collaboration with several other U-M schools and colleges; overseeing the conclusion of the Victors for Michigan campaign which raised $1.5 billion dollars for health system priorities; and development and implementation of Michigan Medicine’s first strategic plan for diversity, equity and inclusion. For 2018-19, the university’s hospitals were ranked No. 5 in the nation and No. 1 in the state of Michigan.

“It is an honor to be able to serve this institution for another term,” said Runge. “Michigan Medicine is an outstanding institution with incredibly talented people. Our mission is to improve health through clinical care, research and education and over the next six years, we will strive for greater advances in health care that will significantly impact the lives of our patients and families.”

“Dr. Runge has positioned us for continued success and societal impact, including expansion of Michigan Medicine’s clinical network in our state, the launch of research initiatives such as Precision Health, and Michigan Medicine’s strategic plan for diversity, equity and inclusion,” Schlissel said. “I am confident that, under Dr. Runge’s leadership and guidance, Michigan Medicine and the medical school will continue to thrive.”

Runge is an honors graduate of Vanderbilt University with a bachelor’s degree in biology and a Ph.D. in molecular biology. He earned his medical degree from the Johns Hopkins School of Medicine where he was an intern and resident in internal medicine. During his distinguished career as a physician scientist and academic leader, he served as a member of the faculty at Harvard University, Emory University, University of Texas (Galveston) and the University of North Carolina (UNC). At UNC, he also served as chair of the Department of Medicine and was the principal investigator and director of the North Carolina Translational and Clinical Sciences Institute.