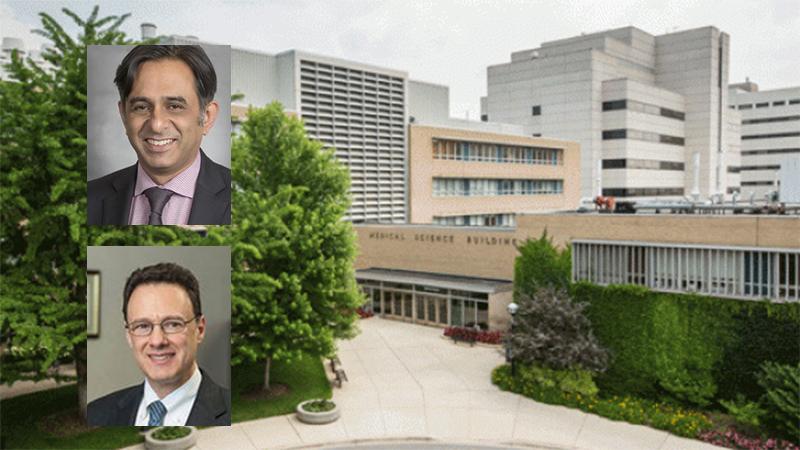 Gulani (top), who also was appointed the Fred Jenner Hodges Professor of Radiology, comes to the U-M from the Case Western Reserve University School of Medicine, where he served as the Joseph T. Wearn Professor and a professor of radiology, urology and biomedical Engineering. He also was director of MRI and body MRI for University Hospitals Case Medical Center, and co-director of the Prostate Cancer Imaging Group and member of the Cancer Imaging Program at the Case Comprehensive Cancer Center.

Gulani began his academic career at CWRU, where he worked in body imaging, computed tomography (CT), diagnostic radiology, genitourinary procedures, magnetic resonance imaging (MRI) and ultrasound. He is a respected leader in MR research, focusing on technology development and translation in MRI, with areas of emphasis that include MR relaxometry, perfusion, diffusion, body MRI, and image acquisition and reconstruction.

He has been named a Distinguished Investigator by the Academy of Radiology Research,  and elected fellow of the International Society of Magnetic Resonance in Medicine.

Chervin (bottom) is the Michael S. Aldrich Collegiate Professor of Sleep Medicine and director of the University of Michigan Sleep Disorders Centers. He takes over leadership of the department from David J. Fink, M.D., who served as chair since 2004 and will become professor emeritus of neurology July 1 after he retires from active faculty status on June 30.

Under Fink’s leadership, the department has grown to 100 full-time faculty with 16 endowed professorships. The clinical programs, which include more than 50,000 annual outpatient visits, 1,500 admissions and 5,000 consults, ranked (with Neurosurgery) ninth nationally on the 2018 U.S. News and World Report list. The department’s research programs, ranging from robust basic science lab-based programs through an active clinical trials enterprise, garnered $29 million in National Institutes of Health (NIH) funding in FY18, good for seventh place among neurology departments nationally.

A professor of neurology, Chervin earned his medical degree from Stanford University. After completing a residency in neurology at Cornell University Medical Center, he finished a fellowship in sleep medicine at Stanford. In 1994, he joined the U-M faculty as an assistant professor. He rose through the ranks to professor in 2006.

His NIH-funded research focuses on the impact of sleep disorders on neurological conditions in children and adults. He has contributed to research on a wide variety of subjects in sleep medicine, including obstructive sleep apnea, excessive daytime sleepiness, polysomnographic methods, and biomedical innovation. As director of the Sleep Disorders Centers, he has led development of a highly multidisciplinary program that is among the largest in the country and widely respected for its clinical services, educational programs, and research productivity.