Partnership aims to expose promising Chinese medical students to research and, over time, increase the number physician-scientists in that country 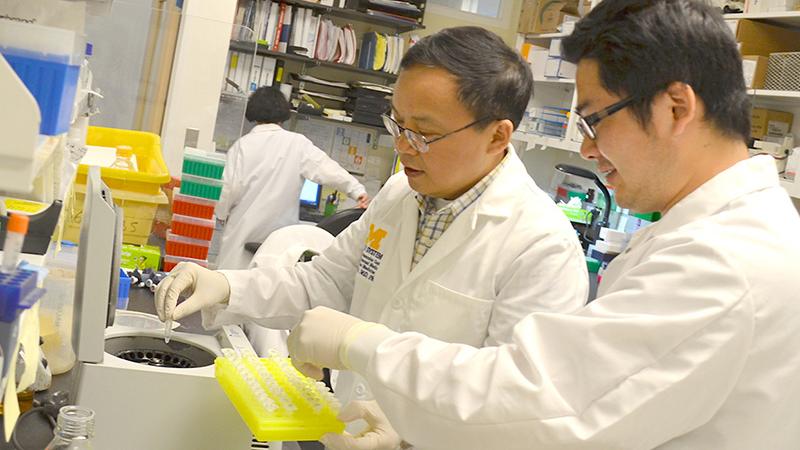 Professor of Cardiovascular Medicine Y. Eugene Chen, M.D., Ph.D., (center) and Xiangya University medical student Wei Xiong work in Chen’s lab at the North Campus Research Complex. Xiong is among the first students to complete a two-year research program at the U-M as part of a partnership with Xiangya University.

Five promising young scholars have become the first to complete a new program which brings medical students from China to learn research at the University of Michigan.

The partnership between the U-M Medical School and Central South University Xiangya School of Medicine, in southern China, brings a handful of students to Ann Arbor for two years to work in a research lab under a U-M faculty mentor. Medical Ph.D. research programs are rare in China, so the partnership aims to expose promising Chinese medical students to research and, over time, increase the number physician-scientists in that country.

“In the long term, I believe we are helping to train the students who will become the future leaders of medicine in China,” said Y. Eugene Chen, M.D., Ph.D., the Frederick G. L. Huetwell Professor of Cardiovascular Medicine, professor of internal medicine, surgery, pharmacology, and molecular and integrative physiology, and vice-chair for basic and translational research, who championed the new program. “These students can return to China to have a huge impact in the field, and the University of Michigan will have played a key role in their training and education.”

The program is one aspect of a larger partnership, formalized in 2014, with Xiangya School of Medicine allowing for exchange of faculty, researchers, and students between the two institutions. The first five students to participate recently presented their research findings before Chen and other UMMS leaders, including Joseph C. Kolars, M.D., the Josiah Macy Jr. Professor of Health Professions Education and senior associate dean for education and global initiatives. Kolars also is director of Global REACH, which administers the program.

“I’m impressed by the students’ work and grateful to the mentors who put in the extra time and energy to guide these young researchers and shape their experience,” said Kolars. “Thanks to their efforts, this has been a terrifically successful partnership launch.”

One of the mentors is Scott Soleimanpour, M.D., whose Internal Medicine lab is studying cellular causes of and contributors to diabetes. An M.D. researcher and assistant professor of endocrinology, Soleimanpour had the chance to take two years off during medical school to learn research, much akin to the Xiangya students’ experience.

“The opportunity to mentor a student in a similar situation to my own educational experience was gratifying. That was one of the reasons I was excited to be involved,” he said. “The program has been fantastic. Of course as a mentor you’re asked to give something, but I feel like I got something too. Not only did my student do an amazing job, but it personally feels good to kind of pay it forward.”

The five students represent the first cohort to enter and finish the two-year program. Two subsequent groups have enrolled as well, each larger than the last. The most recent cohort includes 10 Xiangya students.

Each student works in a different lab on a unique project. Two of the projects have already produced publications, with several more papers in the pipeline. Among the students is Pei Li, whose work exploring a protein that could play a role in preventing certain kinds of chronic liver disease has already been published.

Like all of the students, Li will need to return to China to complete her eight-year medical program at Xiangya. But the experience at the U-M prompted her to re-think her future career after that, she said.

“In China, most medical school graduates typically have two choices, to be a university professor or a practicing doctor,” she said. “After this, I have another plan. I want to apply for a Ph.D. program and continue doing research.”