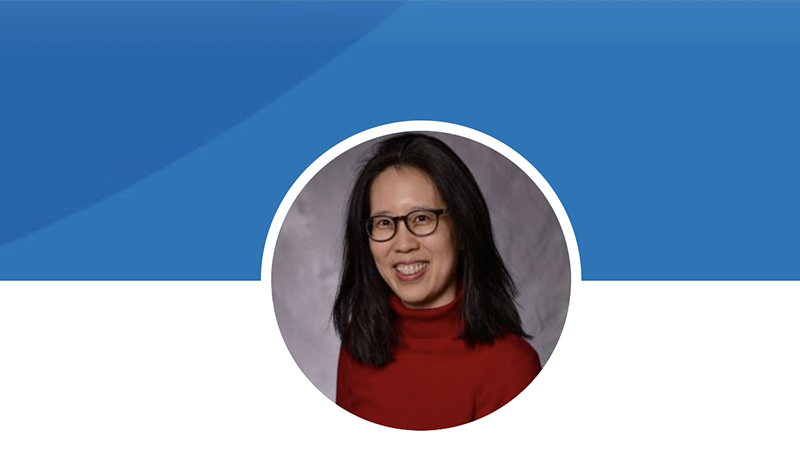 The worlds of medicine and federal policy can feel miles apart to those who spend their careers in the halls of hospitals or Capitol Hill. But Lena M. Chen, MD., M.S., felt comfortable in both arenas, and worked to understand how changes made in Washington, D.C. affected the lives of individual patients, including those she cared for herself.

Chen, who died July 21 at the age of 49 after a sudden catastrophic illness, strove to help those two worlds understand one another. She was both an associate professor of internal medicine at the University of Michigan, and a senior advisor to a deputy assistant secretary in the U.S. Department of Health and Human Services (HHS).

As a hospital-based physician specializing in the care of inpatients, she was known for high standards and excellent mentoring of younger physicians and medical students at Michigan Medicine, U-M’s academic medical center, and at the VA Ann Arbor Healthcare System. She joined U-M in mid-2009 and rose to associate professor in 2018.

As a member of the U-M Institute for Healthcare Policy and Innovation (IHPI), she worked to bring health services researchers from different disciplines together for projects. Together, they harnessed massive healthcare data to look at how changes in federal law affected patient care and the economics of health care, including unintended consequences that can only be seen after new requirements and programs take effect.

That same goal drove her work in HHS’s office of the Assistant Secretary for Planning and Evaluation, or ASPE, where her expertise informed a number of projects aimed at evaluating the impacts of specific federal actions. It was here that she expressed her gift, the ability to translate her experience in taking care of patients to address important questions in the policy realm.

“Lena was an emerging national leader in using health services research to inform national health policy,” says Laurence McMahon, M.D., M.P.H., chief of the U-M Division of General Medicine. “Her clinical experiences in hospital medicine, including her time as director of the Johns Hopkins Hospitalist Program, informed her research and helped provide a focus on how health policies affected individual patients. In her time as a member of the team at ASPE, she brought her clinical insight to shape the analytic approaches used to enhance Medicare policy.

“Most importantly, she was a kind and generous colleague, whether helping others with their research, translating research into national policies or covering a hospital shift for a colleague with a sick child,” adds McMahon. “We are all better for having known Lena, and she will be missed.”

Chen earned both her bachelor’s degree and master’s degree in health policy and management from Harvard University, and her medical degree from the University of Pennsylvania.

She began her career as a reporter and then a management consultant, but missed interacting with patients as she had done early in her training, and entered medical school. After residency at Penn, time at Johns Hopkins University, and fellowship at Harvard, she moved to Michigan in 2009. She rose from clinical lecturer to assistant professor, and became a tenured associate professor in 2018.

At IHPI, she used her expertise in health policy to help develop and launch a new program called Policy Sprints. These rapid analyses, conducted by U-M teams with funding from IHPI, address important health policy questions and produce findings that could inform decision-makers at the local, state, or national level.

She began her public service at ASPE in 2015, and played a key role in a 2016 report to Congress on the interplay of social risk factors, such as income, education and race/ethnicity, in Medicare’s value-based payment programs. She was part of a team that in 2016 received the U.S. Department of Health and Human Services Secretary's Award for Meritorious Services. After returning to U-M full time in 2018, she continued in a consulting role at ASPE.

Colleagues remember Chen as having a unique ability to bring together researchers from diverse disciplines, such as general internists, surgeons, health economists and others, to create novel multi-disciplinary teams to answer important research questions that impact public policy.

For instance, she led a $1.8 million grant from the federal Agency for Healthcare Research and Quality to study the impacts of Medicare accountable care organizations on post-hospital care – an area where she and colleagues found wide variation in practice and costs in 2017.

She had also received funding from the American Heart Association to study survivors of cardiac arrest. She also worked with the Michigan Value Collaborative, a U-M-based effort funded by Blue Cross Blue Shield of Michigan to improve the value of care at 85 hospitals across Michigan. And she was a member of the U-M Center for Healthcare Outcomes and Policy, a health services research group focused on acute and specialty care.

Chen was a member of the health services research professional society AcademyHealth, the Society of General Internal Medicine, and the Society of Hospital Medicine. She authored or co-authored 47 peer-reviewed research articles, and spoke on her research at a wide range of conferences.

Memorial arrangements, including donation information, will be forthcoming.