From 20 beds in a converted house to a nationally recognized system of care: How the University of Michigan has influenced medical history 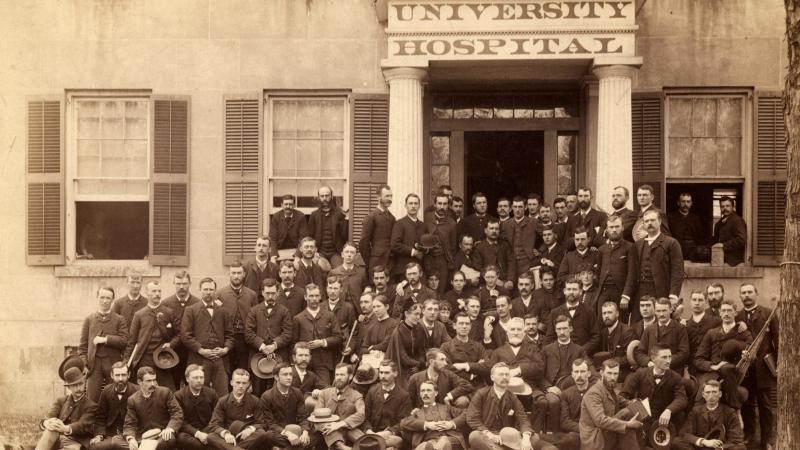 In the years just after the Civil War, the University’s medical professors — all six of them — debated the dominant question in medical education: Was it enough for their students to learn medicine simply by listening to lectures? Or should they be taught at the bedsides and surgical tables of actual patients?

And if it was the latter, as the professors came to believe, shouldn’t the University have its own hospital?

Skeptics pointed out that the University trained lawyers without opening its own courts and engineers without building its own railroads. Many students had already been apprentices to doctors before entering U-M. Surely it was enough to send them out for an occasional glimpse of bone and sinew in the wards of existing hospitals.

But now, with mounting pressure from students for clinical instruction (learning by the operating tables and bedsides of patients), and medical professors overrun by local patients, the pro-hospital voices were winning out. Finally, with funds newly appropriated by the state legislature, the regents approved the idea.

But there was no money for a new building, the regents told the medical professors – just use the house on North University, one of four identical “professor’s houses” and the one nearest the Medical Building. The hospital steward, John Carrington, was allowed to move his family into the basement and was paid 75 cents per week for every patient he admitted.

The regents allotted $582.18 to convert the house into a medical facility. For medicine the doctors got $55.37. They treated their first patients in December 1869.

The house had space for 20 beds but no rooms for examinations or operations. Those were done in the Medical Building on East University, so patients had to be carted over for procedures, then carted back. The house was so cold and smelly that winter the doctors had to ask the regents for $260 more to pay for a better furnace and ventilation.

It could just barely be called a hospital. But it was the first in America owned and operated by a university, and it set the trend for ambitious universities across the country.

This little enterprise would grow so steadily for so long that in 150 years it would no longer be called a hospital at all. It would become a health system – now called simply “Michigan Medicine” – encompassing three major hospitals, several major treatment centers and scores of research centers, clinics, institutes, laboratories, helicopters, and a library spread across Ann Arbor and reaching into 25 other cities and towns, all intertwined with one of the world’s great medical schools and staffed by some 3,000 physicians, surgeons and scientists, 5,700 nurses and thousands more support staff who, together, would annually handle 2.1 million patient visits, perform 60,000 surgeries, treat 100,000 emergencies and deliver 4,600 babies.

Read more about the evolution of care at Michigan Medicine on the University’s Heritage Project website.

150 Years at the Hospital (link is external)