An iconic figure in surgery at Michigan for decades, he cared for thousands of patients and helped train generations of surgeons 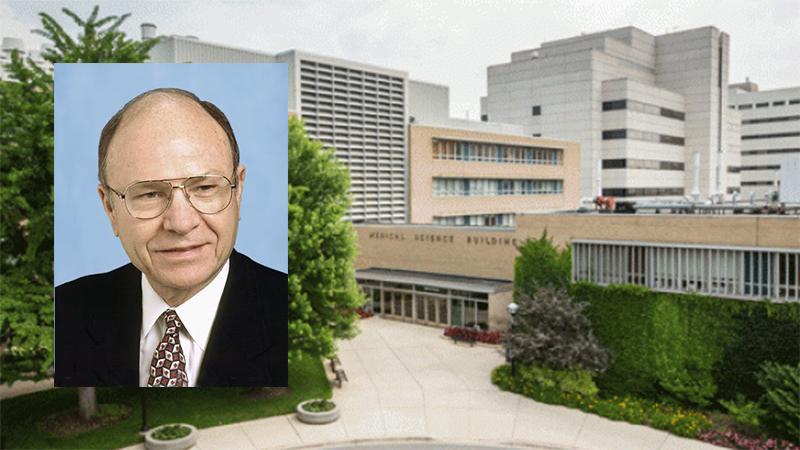 Turcotte was an iconic figure in surgery at the University of Michigan for decades. During his career, he cared for thousands of patients and helped train generations of surgeons.

He graduated from the University of Michigan Medical School in 1957 and continued into the General Surgery Residency Program. He joined the faculty in July 1963. Shortly thereafter, in March 1964, Turcotte and C. Gardner Child, M.D., performed the first kidney transplant in Michigan. Turcotte went on to lead the team that performed the first liver transplant in Michigan in 1985. He also created the University of Michigan Transplant Center and served as the first Transplant Center Director.

Turcotte’s professional career was focused on advancing care related to portal hypertension, liver surgery, and organ transplantation. Aside from his work in transplantation, he played a prominent role in defining the role of surgical therapy in treating patients with portal hypertension. Working with Child, he developed a scoring system in 1964 that was initially designed to predict operative mortality associated with portocaval shunt procedures. The scoring system was subsequent modified by Pugh and co-workers in 1973. The Child-Turcotte-Pugh (CPT) score has been used for decades as a prognostic tool for patients with cirrhosis, and it formed the basis of deceased donor liver allocation in the United States for many years.

He served as chair of the Department of Surgery for 13 years (1974-87) and played a key role in creating the vision for the current University Hospital. During his tenure as chair, he significantly expanded the number of faculty, created the sections of Pediatric Surgery and Plastic Surgery, and increased surgical research space nearly five-fold. He was instrumental  in organizing the medical school Faculty Professional Fee Management Plan and was appointed as the first chairman of the Professional Fee Management Policy Committee. He also served as head of the Section of General Surgery.

Turcotte was an active leader in multiple surgical societies. He was a founding member of the American Society of Transplant Surgeons (ASTS) and he served as the sixth president of the society (1979-80). He was a founding member and subsequent president of the Transplantation Society of Michigan (now Gift of Life Michigan). He went on to serve as the President of the United Network for Organ Sharing (UNOS). He had a strong interest in ethics and served as the founding chair of the ASTS Ethics committee and he was the first chair of the Ethics Committee for UNOS.

In 2001, Turcotte retired as professor emeritus of surgery. In 2004, he was given the Distinguished Service Award by the University of Michigan Medical Center Alumni Society, and in 2006, the Medical School inaugurated the Jeremiah and Claire Turcotte Professorship in Transplantation Surgery.

A Mass of Christian Burial will be at St. Mary Student Parish at 11 am. on March 14. Further details regarding arrangements will be updated at this link: https://www.dignitymemorial.com/obituaries/ann-arbor-mi/jeremiah-turcotte-9035283.