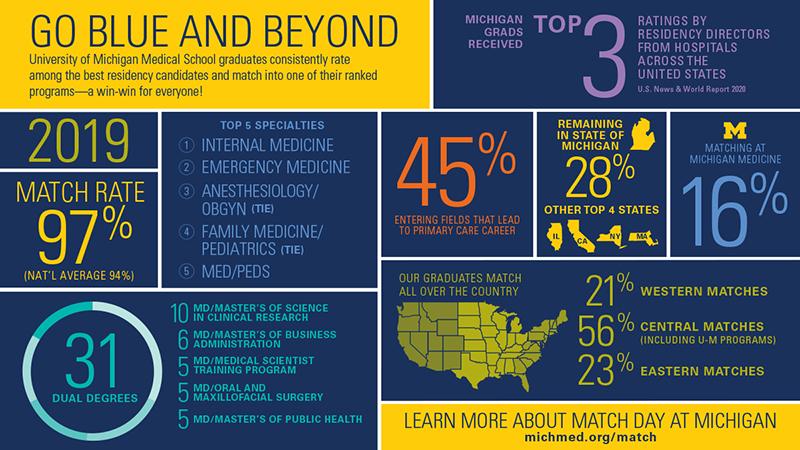 Today at noon, 157 University of Michigan medical students ripped open envelopes, and instantly knew where they’ll spend the next three to seven years of their lives.

Together with nearly 19,000 of their peers nationwide, the students were participating in Match Day, an annual event which reveals where graduating students have been accepted for residency training. At that magical hour, each student receives an envelope containing the name of the medical center where that student will embark on specialized training that will shape their medical careers.

Hundreds of family and friends joined the students at U-M’s North Campus Research Complex for the dramatic, emotional, envelope-opening moment.

And just as before, this year’s match brought U-M Medical School students welcome news. Nearly all of them (97 percent) matched to one of the residency programs they put on their lists, far exceeding the national average. That success rate comes despite intense and growing national competition for a limited number of training spots.

Twenty-eight percent of the students will stay in Michigan for the bulk of their training, including 16 percent who will continue their education at Michigan Medicine, U-M’s academic medical center. The rest will spread out over 25 other states, starting residency training this summer.

“There’s a reason that residency directors gave our graduates the third-highest score in the nation on the recent U.S. News rankings that came out this week,” says Rajesh Mangrulkar, M.D., associate dean for medical student education. “Our students bring their best to Michigan, and we do our best to help them prepare for careers as leaders and agents of change in medicine. Today, we celebrate what they’ve achieved and the promise their futures hold.”

Highlights of this year’s match for U-M students:

More about Match Day: Each graduating medical student around the country enters the matching process after interviewing at several programs, by ranking the locations where they’d most like to train for their chosen specialty. In turn, the residency programs run by each teaching hospital and academic medical center rank the students they interviewed that they’d most like to take. Then, an elaborate computer-based system puts it all together to make the best matches. Learn more about the process at http://www.nrmp.org.