During a quarter century of outstanding leadership — including two name changes to the unit they directed together — Huda Akil, Ph.D., and Stanley J. Watson, M.D., Ph.D., successfully led the Medical School’s contributions to the field of neuroscience 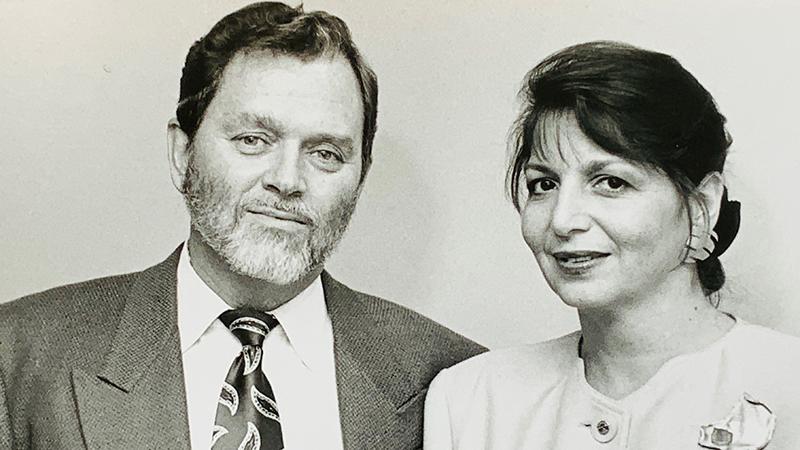 During a quarter century of outstanding leadership — including two name changes to the unit they directed together — Huda Akil, Ph.D., and Stanley J. Watson, M.D., Ph.D., successfully led the Medical School’s contributions to the field of neuroscience as co-directors of the Molecular and Behavioral Neuroscience Institute (MBNI).

In 2020, the MBNI was reimagined as the Michigan Neuroscience Institute (MNI), and on March 1, 2021 Akil and Watson will hand over the reins of the institute to Henry L. Paulson, M.D., Ph.D., who was approved as interim director by the U-M Board of Regents on Feb. 18, 2021, and Shelly B. Flagel, Ph.D., who has been named interim co-director. Read more about their appointments HERE.

Akil and Watson remain active faculty in the Medical School and will continue to lead vigorous research programs while contributing to U-M’s scholarship in neuroscience. They continue a partnership that started in 1978 when both joined the U-M faculty as assistant professors of psychiatry. They followed a familiar path to associate professors in 1981 and professors in 1987. In 1995, they were appointed co-directors of the Mental Health Research Institute (MHRI).

A decade later, they shepherded the institute through a transition when, during its 50th anniversary as the MHRI in 2005, the unit was renamed MBNI — a change that underscored the institute’s commitment to fundamental research in brain biology, as well as its translational mission. Fifteen years later, the name has changed again, to MNI, but their leadership remained steady.

During the Akil-Watson directorship, the institute created a strong and dynamic community of neuroscientists focusing on both basic and translational neuroscience. They successfully partnered with several departments in Michigan Medicine and LSA to recruit outstanding faculty who develop and use state-of-the-art tools to address brain biology and function in health and disease.

The MBNI/MNI also is a key node of the Pritzker Neuropsychiatric Research Consortium, a national collaboration aimed at understanding the brain biology of major psychiatric disorders. In addition, the institute has promoted neuroscience more broadly on campus, with multiple members serving as directors or associate directors of the Neuroscience Graduate Program. Over the years, the institute established and hosted the Kavli Neuroscience Innovators Program, a forum of young investigators from across campus fostering mutual support, innovation and collaboration amongst the rising stars in Michigan neuroscience.

While successfully leading the institute for more than two decades, Watson and Akil have made seminal scientific contributions to their field.

Watson is the Ralph W. Gerard Professor of Neuroscience in Psychiatry. He is a psychiatrist and internationally renowned neurobiologist. He has pioneered the use of functional neuroanatomical approaches to define the expression and regulation of neural circuits relevant to stress, pain, addiction and depression. He and his colleagues developed the method of in situ hybridization for studying localization and regulation of neurally expressed genes, a tool now part of the repertoire of most neuroscience laboratories. His recent work focuses on human functional neuroanatomy and the discovery of new molecules relevant to severe psychiatric disorders. He also has made key contributions to health policy issues, particularly in relation to medical marijuana. He has received numerous honors and awards including the prestigious Sarnat Award from the Institute of Medicine and his election to the National Academy of Medicine (NAM).

Akil is the Gardner Quarton Distinguished University Professor of Neuroscience and Psychiatry. She and her colleagues have advanced the understanding of the brain biology of emotions, including pain, anxiety, depression and substance abuse. She provided the first physiological evidence for a role of endorphins in the brain, and showed that endorphins are activated by stress and cause pain inhibition. Her current research investigates the genetic and neural mechanisms underlying addiction and mood disorders. Her contributions have been recognized with numerous honors and awards, including election to NAM, the National Academy of Sciences and the American Academy of Arts and Sciences.

“It has been a great honor for us to co-direct this institute for a quarter of a century,” said Akil and Watson. “Our field has come of age during that period, with spectacular advances in the brain sciences coupled with an appreciation of the crushing burden of brain-related disorders. We are therefore extremely thankful to the administration for their strong commitment to both basic and translational neuroscience and to a broader vision of the role of the MNI in enhancing the integration of neuroscience across campus.

“We are especially grateful to Drs. Paulson and Flagel for their willingness to lead the MNI during this critical transition. They are the ideal team for sharpening this vision and laying the groundwork for an exciting future for neuroscience at the University of Michigan.”