William Henry Fitzbutler, M.D. (top left), the first African-American man to graduate from the Medical School, is among those featured 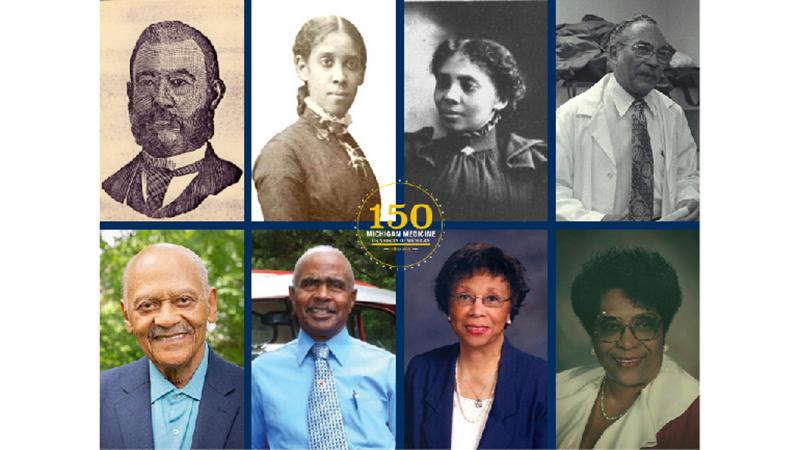 For nearly 100 years after the Civil War, African-Americans who aspired to become doctors had few choices — but the University of Michigan was one of them.

In honor of that heritage, and of Black History Month, here are some key milestones and people who play a special role in our institution’s past:

1853: U-M’s first student of African-American heritage enters the U-M Medical School – but “passes” as white because of his mixed-race background. Samuel Codes Watson went on to graduate from a medical school in Cleveland, and to become a leader in pharmacy and politics in Detroit.

1863: Alpheus Tucker and John Rapier, Jr. enroll in the Medical School as the Civil War rages, and the nation’s leaders call for the medical training of more men of color. Rapier, a mixed-race man from Alabama who enrolls as a Jamaican thanks to his experience working in the Caribbean and Latin America, stays for nearly the entire academic year before leaving for Iowa. But Tucker endures race-based heckling from fellow students and is literally erased from the list of students soon after arriving. Like Rapier, he went on to earn a medical degree from Iowa. Read more in the Clements Library Quarto.

1872: William Henry Fitzbutler, M.D., becomes the first African-American man to graduate from the U-M Medical School. Born the son of a slave, he had traveled to Canada with his family via the Underground Railroad. After graduation, he went on to found a medical school and hospital for African-Americans in Louisville, Kentucky. One of the four ‘houses’ to which U-M medical students now belong is named for him, as is a professorship in the Department of Internal Medicine.

Read about additional pioneers and pathbreakers, and their achievements, in the Michigan Medicine Newsroom.