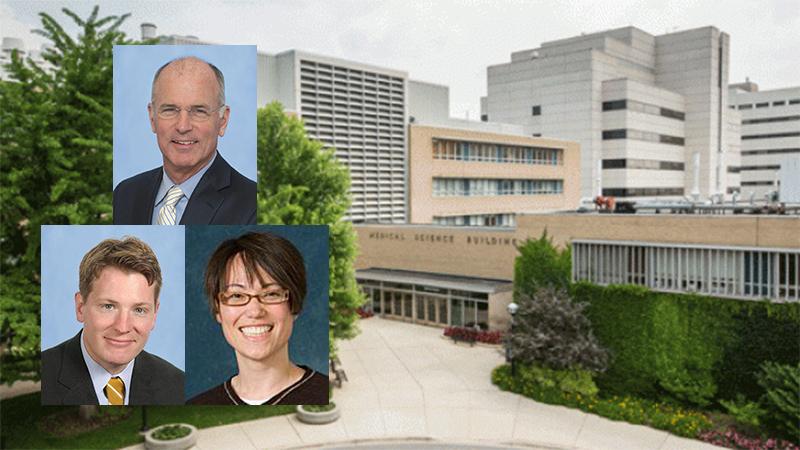 On May 16, the Board of Regents approved the appointments of three faculty to leadership positions in the Medical School.

Mulholland (top) has served as executive director of the University of Michigan Medical Group (UMMG) since January 2019. In his dean role, he will be responsible for executive leadership and oversight of UMMG, our multi-disciplinary faculty practice, as well as ambulatory care operations, eHealth initiatives, physician workforce planning, and more. He will work closely with all relevant entities to develop, deploy and integrate clinical care with the research and educational missions of the Medical School.

He received his bachelor’s and medical degrees from Northwestern University. He then completed postgraduate training in general surgery, and earned his doctorate from the University of Minnesota. He joined the U-M faculty in 1988 as assistant professor and rose through the ranks to professor in 1995. He served as head of the Section of General Surgery and program director of the general surgery residency program from 1997-2002. He was named chair of the Department of Surgery in 2002, the same year he became the Frederick A. Coller Distinguished Professor of Surgery.

Mulholland also serves as surgeon-in-chief at University Hospital, and is principal director of a research laboratory that has been continuously funded by the National Institutes of Health since 1988. His research interests include neurocrine control of pancreatic exocrine secretion and enteric neurobiology.

His clinical interests are in the area of gastrointestinal surgery. He has a special expertise in the treatment of pancreatic and biliary cancer, neoplastic diseases of the gastrointestinal tract, biliary reconstruction, inflammatory bowel disease, and advanced laparoscopic surgery. He is a member of the Multidisciplinary Pancreatic Cancer Program of the Rogel Cancer Center.

A renowned surgeon and prolific researcher in surgical outcomes, Dimick (bottom left) currently is the George D. Zuidema Professor of Surgery and chief of the Division of Minimally Invasive Surgery in the U-M Medical School, and director of the Center for Healthcare Outcomes and Policy. He has served as associate chair for faculty development and currently is associate chair for strategy and finance in the Department of Surgery. He also is a professor of health management and policy in the School of Public Health.

He earned a Bachelor of Arts in biology from Cornell University, his medical degree from Johns Hopkins University, and Master of Public Health from Dartmouth Medical School. He completed his surgical training at the University of Michigan and a health services research fellowship at the Dartmouth Institute for Health Policy and Clinical Practice. He joined the U-M faculty in 2007 as an assistant professor of surgery and earned promotion to associate professor in 2012 and professor in 2015. After holding the Henry King Ransom Professorship in Surgery from 2012-15, he was named the Zuidema Professor in 2015.

Dimick has served in several national leadership positions, including president of the Association for Academic Surgery and chair of the Health Services Organization and Delivery Study Section at the NIH. He is an associate editor at Annals of Surgery, the surgical innovation editor at JAMA Surgery, and serves on numerous other editorial boards. He has served as an advisor on quality and health policy for several organizations, including the BlueCross BlueShield Association, American College of Surgeons-National Surgical Quality Improvement Program, U.S. News and World Report "Best Hospital" Rankings, and the Medicare Payment Advisory Commission.

His clinical practice is primarily devoted to advanced laparoscopy, including treatment of morbid obesity, gastroesophageal reflux (GERD), paraesophageal hernias, abdominal wall hernias, and other benign and neoplastic diseases of the stomach, spleen, and foregut. He is editor of the widely read surgical textbook, “Clinical Scenarios in Surgery: Decision Making and Operative Technique.”

Caird (bottom right) is the Larry S. Matthews, M.D., Collegiate Professor of Orthopaedic Surgery in the Division of Pediatric Orthopaedics. She takes over leadership of the department from James E. Carpenter, M.D., who served as chair since 2003.

Under Carpenter’s leadership, the department has grown to nearly 50 faculty and 400 staff who collaborate with several disciplines at Michigan Medicine and across the state to treat patients with injuries and congenital, developmental, or degenerative problems of  the musculoskeletal system. He helped to launch the new Michigan Center for Human Athletic Medicine and Performance, and the department has achieved a top-five ranking among orthopaedic surgery departments in research funding from the National Institutes of Health.

Caird has been involved extensively in administrative activities, initially serving as assistant residency director and then in 2015 she was appointed program director of the Orthopaedic Residency Program and associate chair for education for the Department of Orthopaedic Surgery. In the summer of 2018, she served as acting chair of the department for three months. In 2019, she was appointed as the chief of the Division of Pediatric Orthopaedics.

She earned her undergraduate engineering degree and medical degree from the University of Michigan. After completing an orthopaedic surgery residency here and a fellowship in pediatric orthopaedic surgery at Children’s Hospital of Philadelphia, she joined the U-M faculty in 2004 as a lecturer. She rose through the ranks to associate professor in 2014. She was named the Matthews Professor in 2016.

Clinically, Caird treats multiple orthopaedic conditions faced by children including fractures, spinal deformity, and unequal or bowed legs. As director of the Osteogenesis Imperfecta Multidisciplinary Clinic, her areas of expertise include treating fractures and spinal deformity in children with osteogenesis imperfecta, and in the laboratory she investigates bone healing in this disease.

She is a member of the board of directors of the Pediatric Orthopaedic Society of North America (POSNA) and represented POSNA in Northern Europe as one of the 2012 POSNA Traveling Fellows, where she studied and taught at major European centers.