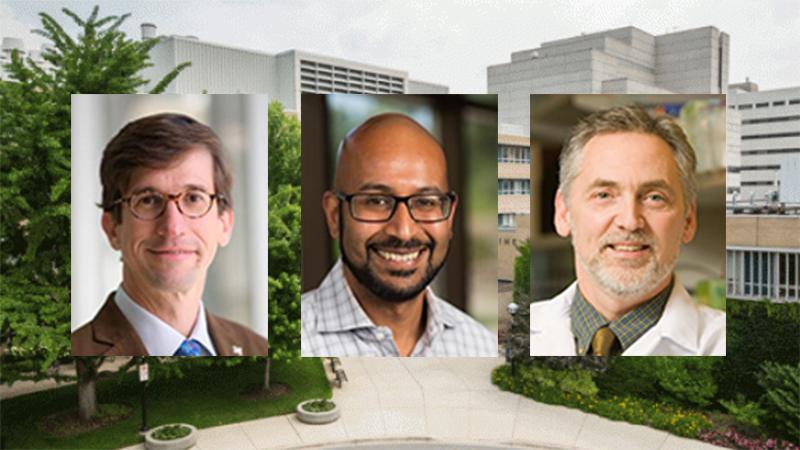 Schnell had served as interim chair of the Department of Molecular and Integrative Physiology since August 2017.

He earned his undergraduate degree from Universidad Simon Bolivar, and his D.Phil. from the University of Oxford in 2002, and completed a Wellcome Trust Senior Research Fellowship at that institution. He was appointed as an assistant professor at Indiana University in 2004, and joined the faculty at the University of Michigan in 2008 as an associate professor in the Department of Molecular and Integrative Physiology. In 2013, he was jointly appointed as associate professor. He was promoted to professor in both departments in 2015, and recently was named as the John A. Jacquez Collegiate Professor of Physiology.

His research program departs from the premise that there is a continuum between health and disease; if we are capable of measuring this continuum, we will be in the position of detecting disease earlier and understanding it better to intervene more precisely. His laboratory focuses on two broad areas: (1) the development of standard-methods to obtain high-quality measurements in the biomedical sciences, and (2) the development of mathematical models of complex physiological systems. His work has substantially altered the view of measuring and modeling enzyme-catalyzed reactions within cells, where the environment is heterogeneous and characterized by high macromolecular content.

An internationally renowned mathematical physiologist, he has 145 peer-reviewed publications, one book, and has received multiple awards in recognition of his research and teaching endeavors. He has remained funded by external and internal sources throughout his career. He served as associate director of the Indiana University Biocomplexity Institute, and president of the Society for Mathematical Biology. He currently is editor-in-chief of Mathematical Biosciences.

He is a fellow of the Royal Society of Chemistry, American Association for the Advancement of Science, Society of Mathematical Biology, and Latin American Academy of Sciences. He has been recognized as an emerging leader in health and medicine by the National Academy of Medicine, and was inducted into the Medical School League of Educational Excellence.

A press release announcing Sen’s appointment can be found HERE.

He is the Kenneth Eisenberg Professor of Depression and Neurosciences, and a professor in the Michigan Neuroscience Institute and Department of Psychiatry in the Medical School. He also serves as associate vice president for research-health sciences in the U-M Office of Research and an associate director of the Depression Center.

He has made seminal research contributions to our understanding of the biology linking stress and major depression and physician well-being. Notably, he initiated and directs the Intern Health Study, a longitudinal cohort study that assesses stress and mood in training physicians. Enrolling more than 25,000 participants from 100+ institutions in the U.S. and China, the project has produced high-impact findings across a wide range of interdisciplinary academic topics including genomics, mobile technology, gender and racial disparities and medical education policy. Work from the study has been published in JAMA, BMJ, Nature Human Behavior and other top journals,and covered in the New York Times, Washington Post, The New Yorker and other media outlets. His expertise in physician well-being has led to service in several national initiatives on this topic, including through National Academy of Medicine.

His and clinical interests concern the causes and treatment of age-related neurodegenerative diseases, with an emphasis on polyglutamine diseases, Alzheimer's disease and frontotemporal dementia. In 1997, his lab described abnormal protein aggregates in the polyglutamine diseases, which now are recognized as a pathological hallmark in this important class of inherited diseases. His lab also pioneered gene silencing strategies that are now finding their way into the clinic for various degenerative brain diseases.

Nationally, he has directed a national consortium of scientists and physicians studying genetic forms of ataxia, has served on the scientific advisory boards of numerous disease-related national organizations, and is a past chair of the Board of Scientific Counselors at the National Institute for Neurological Disorders and Stroke (NINDS) at the National Institutes of Health.

Among his recent awards, he was elected to the National Academy of Medicine, and received the Landis Outstanding Mentor Award from the NINDS. In 2020, he received the Movement Disorders Research Award from the American Academy of Neurology for his pioneering work into the causes and treatment of nucleotide repeat expansion diseases.

Her research focuses on understanding the psychological and neurobiological factors that contribute to individual differences in reward learning and susceptibility to addiction. Her work has identified key mechanisms and circuits that render some individuals more vulnerable to addiction. Her research was recently featured in Scientific American, underscoring its broad impact. She is an associate member of the American College of Neuropsychopharmacology and a Kavli National Academy of Sciences fellow. She serves in leadership positions for the European Behavioural Pharmacology Society and the Society for Neuroscience, and is on the editorial board for the journals eLife and Neuropsychopharmacology.

In 2020, she received the A.E. Bennett Basic Research Award from the Society of Biological Psychiatry, which is granted annually to recognize outstanding contributions from young investigators in the field.

Paulson and Flagel will take the reins of the MNI from Huda Akil, Ph.D., and Stanley J. Watson, M.D., Ph.D., who led the institute for more than 25 years. Read more about their significant contributions to the field of neuroscience, and the University of Michigan, HERE.