Brehm, Frankel, Kellogg, Mott, Taubman, Upjohn and Von Voigtlander — these names are forever associated with some of the top education, research and clinical care facilities in the world 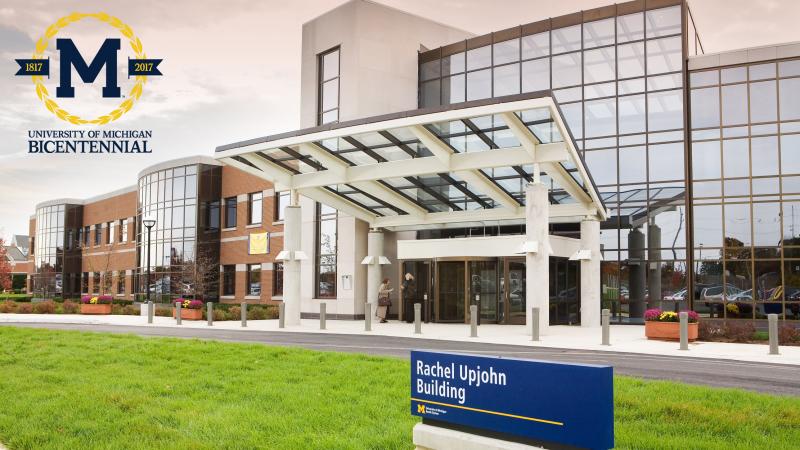 Walking the halls of Michigan Medicine, you hear the names — Brehm, Frankel, Kellogg, Mott, Taubman, Upjohn and Von Voigtlander. These names are forever associated with some of the top education, research and clinical care facilities in the world.

There is a story behind each name, and every family has a history rooted deeply in U-M lore. As the university celebrates its bicentennial in 2017, we take a look at some of the organization’s most well-known facilities.

In 2004, William and Delores Brehm made a gift to the U-M Medical School to further research into Type 1 diabetes. The gift was, at the time, the largest in the history of the university. Establishing the Brehm Center for Diabetes Research and Analysis was an expression of the Brehms’ hope for accelerating the process leading to the cure and prevention of Type 1 diabetes.

Dee Brehm was diagnosed with the disease in 1949 when she was a student at Eastern Michigan University. However, the Brehms’ serious inquiry into diabetes and their quest for a cure were ignited on a quiet Sunday evening at their home in McLean, Va.

As Dee was preparing dinner, Bill walked into the kitchen and asked what he could do to help her. With quiet intensity, Dee turned around, looked at Bill and said, “You can find a cure!” Bill paused for a moment and then replied simply, “OK.”

The Brehm Tower at the W.K. Kellogg Eye Center is an eight-story clinical and research facility that opened in 2010. Two floors are devoted to the diabetes research enterprise and is named in recognition of the Brehms’ generosity.

The W.K. Kellogg Foundation, launched in 1930 by breakfast cereal pioneer Will Keith Kellogg, is among the largest philanthropic foundations in the U.S. The foundation works with communities to create conditions that help vulnerable children realize their full potential in school, work and life.

A lead gift from the Kellogg Foundation in 1981 led to the establishment of the W.K. Kellogg Eye Center, one of the most renowned institutions of ophthalmic research and treatment. W.K. Kellogg, blinded by glaucoma late in life, once said: “I would give all my money just to see the sun and green grass again.”

In 2012, the foundation offered additional support to the KEC to help more ophthalmologists address inequities in children’s eye care, including support for improved eye care for premature babies and providing eyeglasses for children in need.

In 2013, the Cardiovascular Center was named in honor of the late Samuel and Jean Frankel, whose family foundation provided early, groundbreaking support of the center’s innovative model for caring for people with cardiovascular disease.

Samuel Frankel was a visionary Detroit real estate developer. He and his wife were passionate philanthropists whose generosity touched a wide variety of organizations throughout southeast Michigan.

Their transformative gift came in two parts. The first was announced anonymously when the CVC opened in 2007. An equal amount was pledged pending the center meeting goals and outcomes agreed upon by the donor and leaders of the center. Pleased that the goal had been successfully met, the family committed a second gift in 2013.

A leadership gift from the Charles Stewart Mott Foundation in 1964 was crucial to leveraging funds to complete construction of the first C.S. Mott Children’s Hospital, which opened in 1969. In 1984, the foundation again responded generously with a gift that funded renovations of the facility, and again in 2005 to support a new children’s hospital.

C.S. Mott established his foundation in 1926, in response to his deep concern about the welfare of the people of Flint, Michigan.

The foundation’s long-term commitment to pediatric medicine at U-M has made a difference in the lives of countless children and families. Today, the new C.S. Mott Children’s Hospital is one of the most technologically advanced and architecturally significant pediatric hospitals in the world.

Through decades of entrepreneurial success, A. Alfred Taubman maintained an insatiable and abiding curiosity about life and how to make things better.

His quest to make a difference in medicine was fueled by uncommon generosity to the U-M’s clinical educational and research missions. His leadership and support have been recognized through the naming of the Taubman Health Sciences Library and the Taubman Heath Care Center.

With his commitment to create and endow the A. Alfred Taubman Medical Research Institute, he has become one of the largest donors in the history of the university.

The light-filled U-M building that houses its Depression Center, and the lobby of the W.K. Kellogg Eye Center, are named for Rachel Mary Upjohn, who was known later in life as Mary Meader.

Meader was a grandchild of W.E. Upjohn, founder of Upjohn Co. — a pharmaceutical manufacturing firm based in Kalamazoo, Michigan. W.E. Upjohn graduated from the U-M Medical School in the late 1800s, and was the inventor of the first pill that dissolved easily in the human body.

Mary Meader and her husband, Edwin Meader, helped spur the growth of many med school programs and facilities. In addition to establishing a professorship and research fund at Kellogg, the Meaders also made a major gift to launch the center’s expansion campaign. The university named the lobby of the new building in honor of Mary Meader and her grandmother, who shared the same birth name: Rachel Mary Upjohn.

Well aware of the prevalence of depression in this country — and the stigma that so often prevents patients from seeking treatment — Mary Meader also provided generous support to depression research. In addition to supporting a fellowship program and professorship, in 2003 Meader expressed a commitment to make a major gift to a campaign to construct a building to house the U-M Depression Center. The building was named for Rachel Upjohn.

In 2009, a gift came to the organization from the Ted and Jane Von Voigtlander Foundation to support the construction of a new women’s hospital. At the time, it was the largest gift ever made to U-M dedicated solely to women’s health.

Theodor “Ted” Reinalt Von Voigtlander found his niche in the tire industry, joining forces with Discount Tire founder Bruce Halle and going on to build a chain of retail stores that numbered more than 900.

In 1980, five years after marrying Jane Bundon, Ted was rushed to University Hospital after one of his lungs collapsed. He was so impressed with the care he received during his time at UH that he expressed his gratitude with a major gift. Today, the pulmonary unit in Michigan Medicine is named after the Von Voigtlanders.

Ted died in 1999. In 2006, Jane established the Ted and Jane Von Voigtlander Foundation to support children and women’s health, medical research and other causes. That same year, she made a gift to support construction of the new C.S. Mott Children’s and Women’s Hospital. The main concourse of the new Mott Hospital bears her name.

After Jane died in 2007, her daughter, Gwen, became president of the family foundation. Two years later, the foundation made a landmark gift to support construction of the new children’s and women’s hospitals.

The Von Voigtlander Women’s Hospital is home to the Department of Obstetrics and Gynecology and the Center for Reproductive Medicine. It also houses the Birthing Center, Holden Neonatal Intensive Care Unit, High Risk Pregnancy Clinic and Perinatal Assessment Center.

Information for this article came from the book, “Named Spaces at the University of Michigan Health System,” published in 2016 by the Michigan Medicine Office of Development.