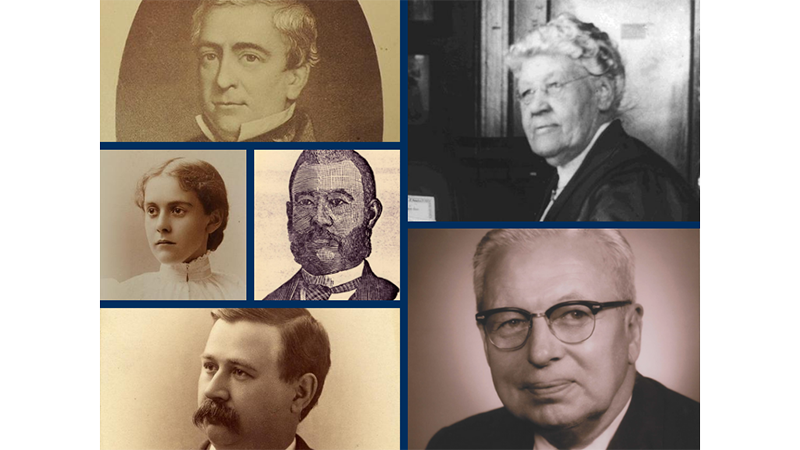 History is all around us on the main Michigan Medicine campus. Which isn’t surprising, given that our Medical School opened in 1850 and our first hospital admitted its first patients in late 1869 — the first university-owned hospital in the country.

But who were the people whose names we see on buildings, lecture halls, organizations and more?

In many cases, they’re people directly involved in our past – founders, faculty or graduates of the Medical School, including physicians who treated patients at our hospitals and clinics.

As part of the ongoing observation of the 150th anniversary of our academic medical center, here are short descriptions and links to more information about some “famous names” enshrined physically or virtually at Michigan Medicine.

At the end, find a link to learn more about other names on major buildings — those of donors whose gifts honored their experience with our care or trust in our research, and foundations that gave us major grants.

Zina Pitcher, M.D.: The 19th century physician with an unusual first name has a street named for him, between Huron and Catherine streets.

Pitcher was one of the first regents of U-M, appointed in 1836 when he was a prominent physician in Detroit. He led the founding of the medical school, arguing in 1847 that it should be “an example worthy of imitation” and that the physicians hired to teach there should be full-fledged members of the faculty, which was unusual at the time. An avid botanist, Pitcher also has a species of thistle named for him. Read more about him.

Victor Vaughan, M.D.: Dean of the medical school for 30 years, and a noted expert in both toxicology and infectious disease, Vaughan’s name is on a red brick office building next to the Taubman Health Sciences Library that started out in 1938 as a dormitory for medical students.

Read more about the building, about Vaughan’s time as dean and his role in the 1918 flu pandemic. An organization for medical students interested in history once bore his name, but it was removed in 2019 because of his support for eugenics. His son Henry Frieze Vaughan, Ph.D., was a noted epidemiologist and the first dean of the School of Public Health, and his name is on one of that school’s buildings.

Eliza Mosher, M.D.: As one of the first women to attend the medical school, starting in 1871 and graduating in 1875, Mosher returned to campus in 1896 as the first female faculty member, a general physician to women students, and Dean of Women. In the intervening years, she had pioneered health programs for imprisoned women in New York. Her name, and that of her successor as dean, Myra B. Jordan, are now on the dormitory on Observatory Street. Read more about her.

Harry Towsley, M.D.: A 1931 graduate of the Medical School who went on to become chair of the Department of Postgraduate Education, Towsley was a champion of continuing medical education, and led the effort to help practicing physicians across Michigan update their knowledge and skills throughout their careers.

He and his wife Margaret, an heir of the founder of the Dow Chemical family, gave funds for the creation of the Towsley Center at the heart of the medical campus. It opened in 1969 and includes the Dow Auditorium as well as a Clinical Simulation Center where thousands of medical professionals from U-M and beyond train each year. Read more about Harry Towsley here.

Read more about the names and faces from Michigan Medicine's rich history in the Department of Communication Newsroom.

Who was that? The people behind the names of Michigan Medicine places and more (link is external)