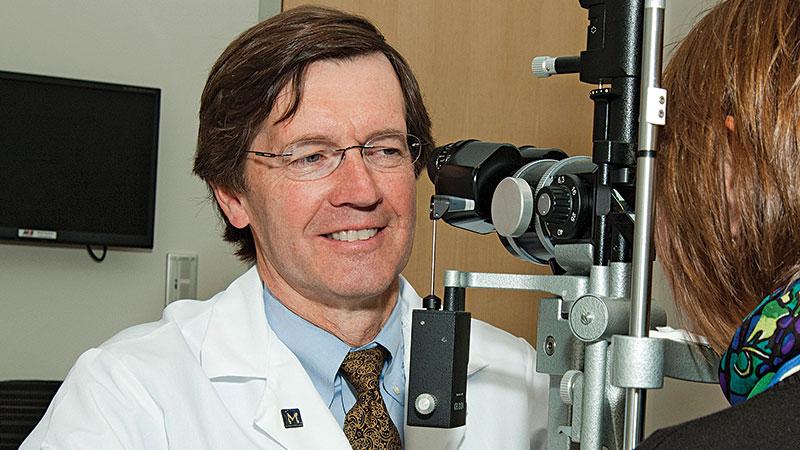 What do you do at UMHS?

I have the privilege of caring for patients with diabetes to help them maintain good vision, and of conducting clinic and laboratory based investigations to investigate the causes of vision impairment, and better means to diagnose and treat diabetic retinopathy.

What do you enjoy most about your work?

Diabetes is a major cause of vision impairment, and the cause of retinopathy remains uncertain. The pathophysiology of this condition, and how to investigate it in humans is a fascinating biological challenge.

What are the practical implications for health care?

The costs of diabetes and its complications are staggering, so means to improve the health of persons with diabetes has important implications for the entire U.S. economy.

When you’re not working, what do you do?

I enjoy spending time with my family — wife, Maureen, and children, Aisling and husband, Nick, Colin and Corinne, a sophomore here at Michigan — reading history books, playing tennis with U-M and Kellogg colleagues, and running for relaxation.

What moment in the lab or clinic stands out as most memorable?

When we realized that diabetic retinopathy impacts the entire retina and this information changed the definition, diagnosis and treatment strategies.

What accomplishments are you most proud of?

Who had the greatest influence on your career path?

My father, Dr. Tom Gardner, was a radiologist and complete physician who grew up on a farm during the Great Depression and didn’t want to spend his life digging potatoes, so he went to medical school. I went to the hospital with him at night, and occasionally he would read films at home. I always thought the process was fascinating, and never thought about doing much else other than medicine. Dr. Joseph Gonnella, the former dean at Jefferson Medical College in Philadelphia, took me under his wing and was a stepfather to me when I was in Philadelphia. Dr. George Blankenship is a former teacher, chair and still a good friend who has had a big impact on my career.

Who or what inspires you?

My patients with diabetes, including my two brothers, Tim and Ted, who both have type 1 diabetes. Worrying about them has kept me up at night, but they have done well. They deal with it every moment of every day, and don’t complain. If they can do that, the least I can do is see what I can do to help them.