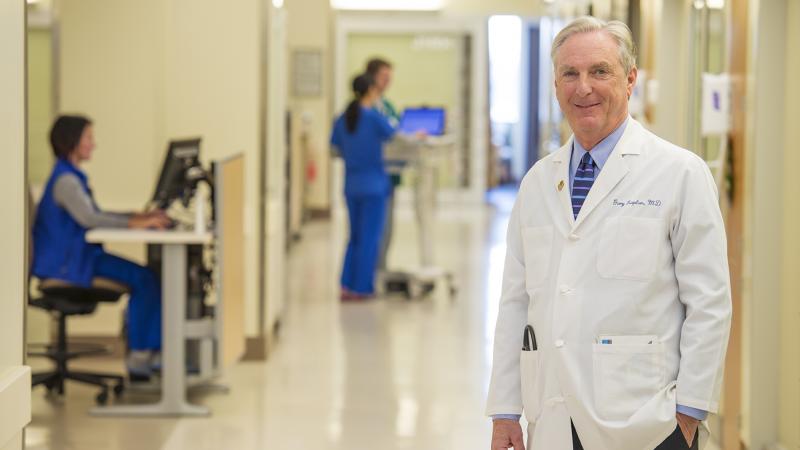 Gary Kaplan, MD, FACP, FACMPE, FACPE is the chairman and CEO of the Virginia Mason Health System in Seattle, where he is also a practicing internal medicine physician. Dr. Kaplan is widely recognized and honored for his exceptional leadership in health care transformation and reform. He graduated from the University of Michigan in 1973, and then from Michigan Medical School in 1978. He also serves on U-M’s Institute for Healthcare Policy and Innovation National Advisory Board along with other expert leaders in all areas of health care from across the country and globe. Recently he took a break from his busy schedule to talk about his years as a med student at Michigan, and how the path he started here led him to an incredible and fulfilling career so far.

Why did you choose to apply to the University of Michigan Medical School?

The first reason is the school’s commitment to excellence and reputation for being one of the top medical schools in the country. I went to U-M for my undergrad as well, and I developed a deep affection for the University, for what it stood for, for the University environment. On top of all of that, it was an in-state program for me as I am originally from southeast lower Michigan. Those are the biggest reasons that I aspired to go to medical school at the University of Michigan.

Do you get the opportunity to return to Ann Arbor?

I do. I come back to the University at least once or twice a year. I serve on the advisory board of IHPI, the Institute for Health Care Policy and Innovation, which is run by John Ayanian, so that’s a great opportunity to come back. I enjoy teaching and have for many years met with residents and medical students in a variety of different formats starting when Allen Lichter was Dean and continuing to today.

Do you have any special memories from your time in Ann Arbor as a med student that have stayed with you?

Yes, many. First, the people and many lifelong friendships. Interestingly, there was a time where four people from my medical school class were at Virginia Mason here in Seattle, which is pretty unusual. We're not a giant medical center, and for most of my career three of us have practiced here. These are friends, lifelong friends, that I made during medical school. So that's one memory. I also think about sports and athletics. I'm a big sports fan and bleed Blue, sometimes to my detriment. As a medical student, this was back in the days when we had to line up for football tickets, my friends and I were tired of being 10th in line, so we decided this one year to be first in line. Because I was in medical school, I would hold our place in line and cover the tent at night, unless I was on call. We camped out for 15 days and this was the last year that they allowed lines to form prior to going to a lottery system.

Finally, the professors. Many of them were highly influential in my early development, and I often reflect on many of those medical school experiences.

How have these experiences informed your career?

I often think about my clinical years in particular, and the experiences I had on the front lines of care learning responsibility, learning judgment, and learning to deal with mistakes as well. I'm very actively engaged in the patient safety world now, and I think my training helped me develop much more of an open mind about a lot of things that may not be typical in medical education.

What do you do to maintain your personal well-being?

One of the things that I believe is important in health care and to be healthy is to work hard and also play hard. This means being able to have other things in your life besides your career to help provide the kind of balance that we all need.

In my career here at Virginia Mason in Seattle, we were the first in the world to deliberately apply the Toyota production system to health care. This is a method of lean management and eliminating waste from one's processes, resulting in higher quality, safer care and lower costs. In fact, one of the biggest problems I think contributing to provider burnout is the waste and the non-value-added processes that we have in medicine.

Learning how to eliminate waste from your work day goes a long way towards engagement and feeling that you're contributing value in your day-to-day work environment. I'm not sure exactly what led me as the CEO of my institution to be willing to explore a management system made popular by automobile and airplane manufacturers, but it's been huge to my development, it’s been huge to our organizational development, and it's been huge to what we’re able to contribute to the health care industry. I think my medical school training helped prepare me for that journey.

What is your best advice for someone who's considering becoming a physician?

Develop one’s self in a comprehensive, more holistic fashion than just the technical aspects of medicine. I knew I wanted to be a doctor early on and so I wanted my undergraduate education to fulfill all of the requirements, but to also help me be a more well-rounded person, to develop empathy, caring and understanding -- the non-science aspects of medicine. I took a lot of psychology courses and things of that sort. Additional advice is to be a lifelong learner: a good listener and relentlessly curious.