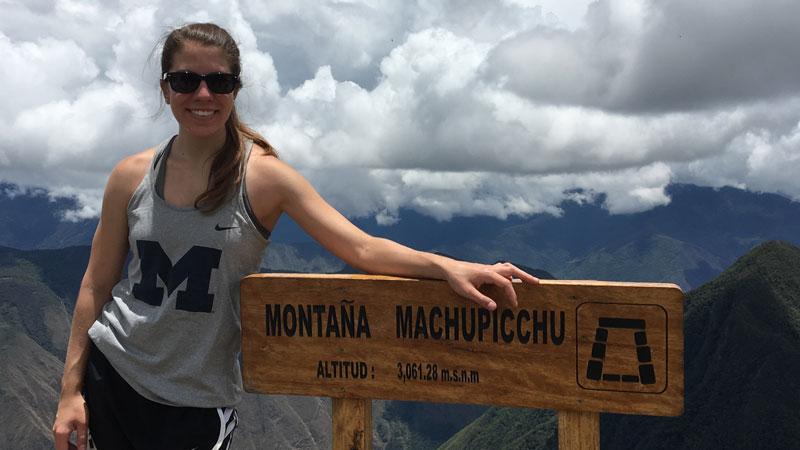 With residency interviewing season well under way, M4 Liz looks forward to entering general surgery after graduation next May. Just returning from an international rotation in Peru, she took a few moments to take stock of this experience along with some of her favorite med school activities, including the Dow Sustainability Fellowship, University of Michigan Asylum Collaborative, happily making a fool of herself in Biorhythms, running her first half marathon and first Ragnar Relay race, and a Sunday brunch tour of Ann Arbor with her younger brother.

Here she answers 8 questions about all of this, plus offers great advice to anyone considering medicine as a career.

What did you do during your rotation in Peru?

I lived in Peru for the month of October. Specifically, I lived in Arequipa (the second largest city in Peru after Lima) in a house with five other students from Australia, the Netherlands, and England. I coordinated my rotation through the Work the World program. Our house even had a house mom/chef named Julia who cooked tradition Peruvian meals EVERY NIGHT. It was incredible! I was totally spoiled. The overall experience was amazing. Don’t be surprised if I move to Peru one day…

As for my daily routine, during the first week I took an intensive Spanish course from 9 to 5 every day. I had more Spanish practice coming in than any of the other students, so I largely worked one-on-one with a former nurse who helped me talk through practice clinical cases in Spanish and expand my vocabulary.

During the subsequent three weeks, I did a clinical rotation in the emergency department at Hospital Goyeneche, the lowest resource hospital in Arequipa that serves Peruvians who cannot afford insurance. Much of the hospital population is composed of Quechan people who live in rural communities in the mountains and often do not speak Spanish. During my last couple of days in Peru, I also rotated through the surgical oncology department, even scrubbing in on a few cases.

I typically worked 8 to 4 p.m. each day and then headed across the street to go to the gym. It sounds cheesy, but joining a gym and working out with the locals was one of the best steps I took toward acclimating to the community and getting a feel for the culture. I LOVED that gym.

The experience was eye-opening. The residents are incredibly well trained, despite the massive lack of resources. There are no percutaneous coronary interventions (PCI’s} for heart attacks. CT’s are a rarity because it requires an ambulance ride to another hospital across the city. Plus, the physical films are 1 cm cuts that are printed as thumbnail images. Open wounds are not stitched up until the patient goes to the pharmacy and retrieves the necessary gloves, syringe, needles, Lidocaine, suture, and bandages. However, when it comes down to life-saving care, Peruvian residents are just as prepared as we are. I saw a team of residents quickly respond to a patient who developed anaphylaxis to Ceftriaxone. Further, the residents I worked with were all far more skilled at the physical exam than comparable residents in the United States.

What did you do when you were not at the hospital or gym?

On weekends, I was able to travel. I hiked the Colca Canyon (which is even bigger than the Grand Canyon!) and visited Machu Picchu. Both were jaw-dropping experiences.

What have been your favorite activities in med school?

I can’t possibly pick a favorite! I carefully picked all of my extracurricular commitments such that I could make a tangible impact on my community, even before I officially earned the M.D. My involvement in Doctors of Tomorrow, the Dow Sustainability Fellowship, the UM Asylum Collaborative and the Curriculum for Health Disparities and the Underserved have all enabled me to directly improve my community. But, I also made sure to balance my life with a bit of levity! With ZERO prior dance experience, I have embarrassed myself in many Biorhythms shows in dances as varied as hip-hop to lyrical dance. I even tried to rap…. It didn’t go too well. No one suggested I quit my day job.

How did you find time to do all of these extracurricular activities?

Diet Coke. Oh, and some good time-management skills mixed with a healthy dose of motivation. I always prioritize tasks that others are depending on me to complete before finishing tasks that only affect me personally. It’s a good trick for staying on top of all your many roles (or at least making it look like you are on top of things!).

I was also very honest with myself. If it ever got to the point where I felt my clinical learning (or workout time!) was suffering, I reached out and asked for help. As a stubbornly independent person, it was a tough lesson to learn. But knowing how and when to ask for help is a crucial aspect of developing as a professional and as a person. We are all lucky to be at an institution with so many talented people at all levels who are willing to support each other.

Did any of these affect the course of your career plans?

Absolutely. Working with passionate students, residents and faculty from multiple disciplines on issues beyond the clinic and the OR has helped me contextualize my scope of practice within the greater sphere of issues that affect human health. I have been so privileged to train at the University of Michigan, and I very much feel the responsibility to be a leader who makes a broader impact beyond my clinical practice.

Michigan has supported me throughout my pre-clinical and clinical years in every idea my peers and I have dreamed up. It is a special place that truly believes that a student can change the world. As Dr. Mulholland asked us at our UM general surgery interview, the only question is how?

What are some of the insights you have gained so far as you prepare to be a physician?

1.     Be patient and forgive the little nuisances. You are in a hospital. You are never seeing anyone on their best day, and you are probably seeing some on their worst.

2.     You cannot make everyone like you, but you can try. Just be prepared to continue doing your best even when your work feels unappreciated.

3.     Never make a promise or set an expectation with a patient that you do not intend to keep — even as something as small as planning to come back later that afternoon. You never know which of your words a patient actually hears, and what may seem like a minor oversight to you can feel like a much bigger disappointment.

4.     Glasses are not the same as goggles. You want goggles in the OR.

What has been your role in the new curriculum transition?

The only role I’ve played is that much of the content I helped develop during my time on the Curriculum for Health Disparities and the Underserved (CHDU) has been incorporated into the new Trunks.

Overall, though, I would say new students can look forward to a more streamlined pre-clinical curriculum that is better tailored to the clinical perspective with earlier exposure to the clinical setting.  I think the ability to interact with allied health professionals early on in medical school will also foster better collaboration in the hospital setting long term. Plus, the added time to explore clinical electives enables students to explore more career paths more thoroughly before selecting a specialty. And, for those diehards who have wanted to be rheumatologists since birth, the added clinical time enables you to explore various facets of your future career more deeply in a protected learning environment where asking questions and learning from your mistakes is thoroughly encouraged.

What would you say to a prospective student who is considering the University of Michigan Medical School?

There is no better place to go to medical school in the entire country, probably in the world. We are undoubtedly the happiest med students in the country because we are privileged to train at an elite institution that feels more like a family.