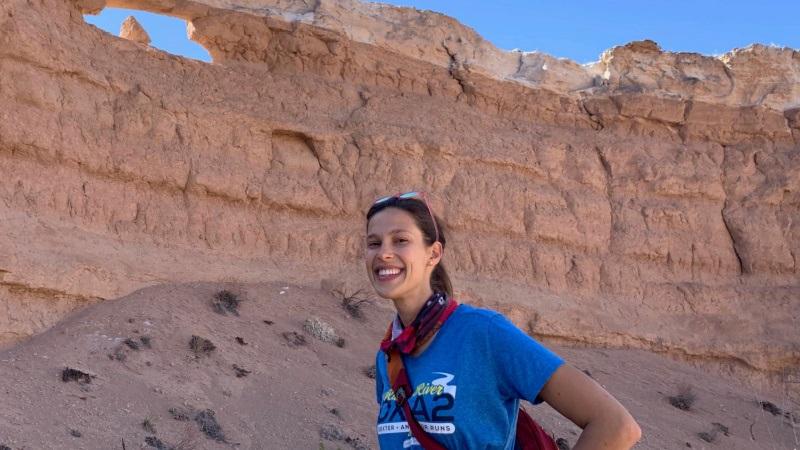 Simona's Michigan Answer: I have found a path at Michigan to be able to serve people through medicine but also commit myself to sustainability and environmentalism.

Fourth-year medical student Simona Martin (she/her/hers) is originally from Los Alamos, NM and graduated from the University of Chicago in 2017. Before she began medical school she spent a year doing research in a bioengineering lab. Currently she's involved with White Coats for Planetary Health, the Student Run Free Clinic, and the Pediatric Student Interest Group and is beginning to interview with pediatrics residency programs across the country.

Here, she shares what motivated her to pursue medicine, how she's combining her passion for environmentalism with a career in medicine, and the projects, people and places that have shaped her experience as a Michigan medical student so far.

What called you to explore a career in medicine?

Probably watching House, MD in elementary school. Just joking (or am I?)—but I have wanted to be a doctor since I was a kid. Medicine seemed like a great way to help people while also solving puzzles involving a complicated and fascinating system: the human body. Reality has met expectations for the most part, and learning medicine while getting to work with inspiring patients and providers has been fun, challenging and fulfilling.

What are the ways in which you’ve been able to explore your passions during med school, and what resources or people have helped you do so?

I have cared about sustainability and the climate crisis for probably as long as I’ve wanted to do medicine. I think it came with the territory of where I grew up; New Mexico is beautiful and rugged, but we’re also familiar with the power of drought and wildfire.

My house was lost along with a good chunk of my hometown during a forest fire—and these fires are only becoming more frequent and more intense. When I chose to go to medical school, it felt like I was betraying this part of myself in some ways—why would I choose to treat one person at a time, when I could be dedicating my time to fighting a crisis that will define the health of generations of people across our planet?

Thankfully, I found a community of students and faculty here at Michigan that showed me that working in medicine doesn’t take away from a career that works toward fighting the climate crisis—but bolsters it. They showed me that as physicians and medical students we are uniquely poised to act and advocate for sustainability, because human health is inextricably tied to the health of our planet.

What comes to mind when you think of your fellow students at Michigan, and how have they shaped your med school experience in big and small ways?

I owe so much of my med school experience to my classmates. It feels like everyone I’ve met is passionate about something outside of medicine, and they are willing to teach and engage in their passions with others—from research, to policy, to advocacy.

I've been able to find multiple communities of students who care about the same causes as I do in student orgs like White Coats for Planetary Health, or in a Path of Excellence like Global Health and Disparities. I’ve learned from discussions and projects with folks I’ve intersected with in these communities, and I’ve made lifelong friends in my class.

Describe your Capstone for Impact project and what you’ve gained from this process.

I'm doing my CFI project through the Dow Sustainability Fellows Program, a program that brings together graduate students from across the University of Michigan to work on an interdisciplinary project in sustainability. I’m working with four students from the schools of Law, Public Policy, Education, and Environment and Sustainability on a project in Costa Rica. We’re partnering with a nature preserve that focuses on education and advocacy to make them a sustainable business plan, as well as help them with their educational curriculum. It’s been invaluable to work on an interdisciplinary team at the intersection of things I care about: education, sustainability and advocating for the health of rural communities.

What aspects of your clinical training have been most impactful and why?

Clinical training during M2 year was strenuous but gave me a solid foundation in academic medicine—working in a quaternary care center meant I got exposure to amazing surgeries and the “zebra” diagnoses we get tested on in exams. What was missing was exposure to rural medicine, which is what I’m interested in doing with my career. But because we finish our core rotations during M2 year, we get to spend our M3 and M4 years doing electives.

The flexibility of M4 year meant I could spend a month in rural Alaska working at an Alaska Native tribal health system, spending time in a village where people don’t have access to running water and only have a physician come through every few months. Sleeping in the clinic and spending my days with folks who don’t have a fully stocked grocery store to get their food, but are instead reliant on the sea ice holding up so they can hunt ugruk in the spring, or depend on the size of the salmon runs in the summer, drove home that 1) these are the types of communities I want to serve in my career and 2) issues like climate change and overfishing are not problems we will have to face in the future, but they are here now, and they are disproportionately falling on vulnerable populations.

The climate crisis is fundamentally an issue of social and health equity—and I’m learning more and more that a career in medicine opens the doors to doing meaningful work in this sphere.

Read more profiles about our students, faculty, staff and alumni.