Surgeon Stewart Wang has been working for years with UMMS colleagues and other US partners to hone the emerging field of Analytic Morphomics.

Now, he’s ready to take his Michigan Medicine-developed method abroad for the first time as one of the first faculty to partner with Chang Gung Memorial Hospital, Taiwan’s largest healthcare system. 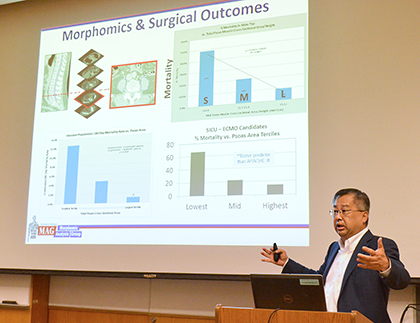 It’s an area Wang, a trauma surgeon, has never worked in. But Morphomics, which provides precise, granular data as to how individuals stack up under various metrics against the population at large, has proven to be good at forecasting prognosis following treatment in many diseases.

“We have this new tool in morphomics which is able to offer a totally fresh perspective across many fields,” said Wang, MD, PhD. “We’ve been at this for a while, but this is the first time we’ve processed a big data set from outside the U.S. To me, that’s a thrill.”

Wang is among a handful of UMMS faculty to receive funding last year for collaborative research projects with Chang Gung Memorial partners. His team earned a one-year, $100,000 grant to explore outcomes across about 300 patients that Ming-Huei Cheng has treated using vascularized lymph node transfer. The procedure involves moving a lymph node (along with connecting arteries and veins) to replace a damaged or missing lymphatic drainage system, often after a cancer surgery treatment. By comparing pre- and post-treatment CT scans, as well scans of the effected limb against the patient’s own unaffected limb, the team hopes identify Morphomic patterns that could be used to predict outcomes among future patients.

“Utilizing this software, we will quantify the tissue changes that occur following vascularized lymph node transfer in lymphedematous limbs. We will also anatomically map the tissue changes that occur following surgery,” the partners wrote in their grant application. “Our findings will impact the future assessment of and surgical approach to chronic lymphedema. This study will provide novel tools and techniques to accurately assess lymphedema patients, as well as quantify their disease progression before and improvement after surgical intervention.”

Morphomics lends itself well to inter-institutional – and even international – collaboration because CT scan technology is highly standardized across the globe. The fact that imaging acquisition processes are highly consistent, regardless of where the scans were taken or by whom, makes large-scale comparisons possible. Analysis is performed at Wang’s UMMS Morphomics lab.

“Most scans are ordered, viewed once, and are rarely looked at again. Yet they are objective and precise, a perfect record of that patient’s body at a given point in time,” Wang said. “With morphomics, the scans become this trove of data with which one can make all sorts of novel comparisons and draw insights.”

Previous projects, for example, have shown strong predictive correlations between the relative size of a patient’s psoas muscle and the likelihood they will survive liver transplant, aortic aneurism repair and many other surgeries. With the study of lymph node transfer – a relatively new and complicated procedure – there are many insights to be learned, not only about which patients are good treatment candidates, but also which methods work the best for which patients.

“We’ve processed the scans from Chang Gung and are just starting the work of analyzing them. It’s a massive amount of data,” Wang said. “The key is to distill that data down to answer the most clinically relevant questions that can improve outcomes, because that is where the rubber meets the road.”