An ongoing project to improve HPV and cervical cancer testing in low-resource settings is ready move out of a U.S. lab and into the field in India.

Professor of Oncology Dean Brenner and his fellow investigators at Arizona State University and the All India Institute of Medical Science (AIIMS) are ready to begin clinical trials for a new point-of-care HPV testing device which researchers say holds promise as an accurate, cost-effective means of diagnosing and triaging women at high risk for cervical cancer. 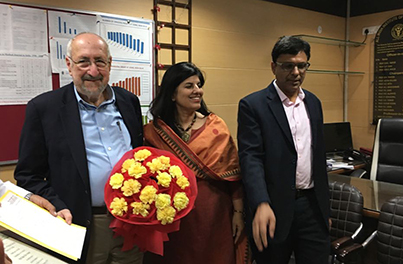 Professor of Oncology Dean Brenner with colleagues at All India Institute of Medical Sciences.

The technology was primarily developed by Brenner’s co-PI on the project, Arizona State tumor immunologist Karen Anderson, MD, PhD and her collaborators at Arizona State’s Engineering School. Brenner is leveraging his translational research expertise and existing partnerships in India for the National Cancer Institute-funded project.

“It’s a new technology capable of detecting HPV antibodies, HPV being one of the causal components of cervical cancer. We believe we can do it accurately and at a cost of around 50 cents per test,” said Brenner, MD. “We’ve spent a lot of time refining the technology they’ve invented and putting into the box. Now the second phase is taking the built tech and making it work in an a low-resource setting.”

The clinical trials will be run through AIIMS, a longstanding UMMS partner school in New Delhi where Brenner and others have been working to bolster research capacity. In early 2017, Brenner and Anderson earned a five-year, $2.6 million grant to develop and deploy the device with colleagues at AIIMS. The National Cancer Institute’s Affordable Cancer Technologies Program supports adaptation of cancer diagnosis and treatment technologies that, while common in high-resource settings, are less available in low- to middle-income countries where two thirds of cancer deaths occur.

Battery-powered and easily portable, the device relies on an LED light and bioflourescent analysis to scan for multiple antibodies associated with HPV. While the approach isn’t new, the device – inexpensive and reliable – is a potential breakthrough in places like India which carries the highest burden of cervical cancer patients in the world; according the World Health Organization, one of every five women in the world suffering from the disease is in India.

The team plans to test the device on up to 500 patients this year at AIIMS before expanding to more clinic sites around New Delhi, with hopes of testing more than 10,000 women before the project’s completion in 2022.

“It’s an exciting project,” said Brenner. “The hope is that this new method will be not just affordable, but more reliable and far less invasive than other methods currently available to women in low-resource areas. It could have a big impact not just for the women on rural India, but in many parts of the world.”