A student's non-profit is helping to train thousands basic first responder skills across parts of Uganda, Chad, Guatemala, and most recently Sierra Leone.

In 2016, during his first global health experience in Uganda, Peter G. Delaney happened to witness a traffic accident. On a busy street near the town’s central marketplace, a pedestrian was struck by a motorcycle taxi, a prevalent form of transportation across much of sub-Saharan Africa. 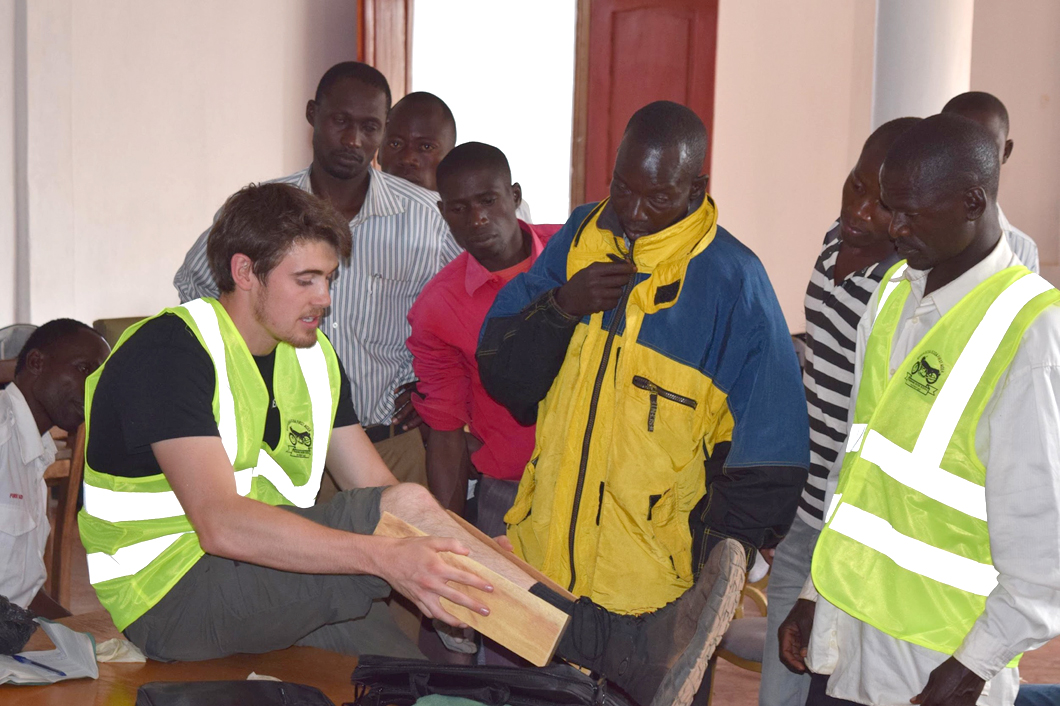 Peter Delaney leads a first responder training in Uganda in 2016.

For Delaney, then an undergraduate student at Washington University in St. Louis and a trained Emergency Medical Technician, what started as a typical scene — a road accident — quickly became less familiar.

“This huge crowd gathered and I expected any minute to hear sirens in the distance, but I never did,” Delaney recalled. “It was a big mentality shift. As an EMT in St. Louis, I responded this sort of emergency all the time and I just realized there is no 9-1-1 here. No ambulance was on the way.”

Delaney helped load the injured man into the back of a car bound for the hospital. Then he immediately started thinking about what more he could do.

Three years later, LFR International, the non-profit Delaney co-founded, has trained thousands of motorcycle taxi operators basic first-responder skills across parts of Uganda, Chad, Guatemala, and most recently Sierra Leone. Delaney began his first year of medical school at UMMS last fall and his project has already earned the admiration of faculty and financial support from the institution to help expand the LFR training model.

“What Peter has been able to accomplish is very impressive. He has a vision and, more important, the ability to act on it to make an impact,” said Professor of Surgery and Director of the Michigan Center for Global Surgery Krishnan Raghavendran. “I knew immediately that I wanted to help.”

Raghavendran last summer allocated funding through the Michigan Center for Global Surgery to help LFR validate and accelerate its training model in Sierra Leone, and Global REACH in December awarded Raghavendran and Delaney a $10,000 Partnership Development Grant to the same end. UMMS is now an official partner in a coalition with LFR, the Sierra Leone Red Cross Society and others, a group that aims to make the taxi driver training model a foundational program for formal emergency medical services development there.

“Among my chief reasons for choosing UMMS was that the curriculum was flexible enough to allow time to continue this work. But as soon as I got here, the support and interest from faculty mentors has been above and beyond,” Delaney said. “For me, it’s an affirmation — not only of my decision to attend U-M, but also of our work through LFR. It’s gratifying to know that something you worked so hard for is recognized as meaningful by others, particularly field experts.”

One of those experts is Assistant Professor of Surgery Jonathon Scott, who, before coming to UMMS last fall, spent a year in Rwanda working to bolster prehospital care services. Scott has also been advising Delaney on his project and on balancing his continued involvement in LFR with his workload as a first-year student.

“As a faculty member, you of course meet a lot of students who are interested in global health, but Peter has been able to translate his interests into action with a maturity and an insight that is exceptionally rare,” said Scott, MD. “He’s latched onto an idea that really seems to be effective. And it’s clear that the motivation isn’t ‘I want to see my idea work.’ It’s ‘I want to see people’s lives improve.’

“I’ve been floored by what he’s been able to do,” Scott said.

Delaney and fellow Washington University student Zachary Eisner founded LFR in January 2019 based on a successful track record of pilot projects in Uganda and Chad. The trainees have been putting their skills to good use. The first 150 drivers trained in Uganda in 2016 reported sustained volunteer involvement over three years, and also reported deriving additional social and economic benefits from participating. In Sierra Leone, the first 1,000 drivers trained by LFR have assisted in more than 2,000 trauma incidents in six months since their training last summer. LFR trainees across the world have assisted nearly 5,000 patients since 2016.

In Sierra Leone, the success in Uganda caught the attention of leaders at the country’s national Red Cross organization, academics at the University of Makeni, and leaders at Holy Spirit Hospital, also in Makeni, the largest city in Sierra Leone’s Northern Province. Together, the group formed the First Responder Coalition of Sierra Leone and devised a train-the-trainer model relying on local educators to accelerate course delivery. The Makeni region now boasts 4,500 motorcycle taxi operators trained as first responders, all certified since the start of 2019.

The funding from the Michigan Center for Global Surgery and Global REACH will help Delaney conduct research on incident response, knowledge retention among trainees and trainers, and more. Plans for the Sierra Leone project in 2020 include analyzing the incident response data collected by the drivers; expanding the training curriculum to cover common non-trauma emergencies like childbirth and obstetric emergencies; establishing an emergency dispatch center, and more, work that Delaney hopes others at U-M will now be able to engage in.

“One of the most exciting things about having UMMS as an official partner is the potential to bring all of this institutional expertise to bear on different aspects of our work,” he said. “As we move forward, there is so many opportunities for U-M faculty and students to get involved. I’m excited to see where this goes.”