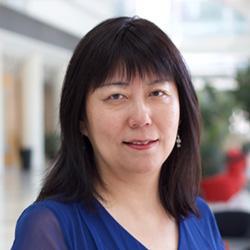 I'm an Associate Professor of Medicine and Cell and Developmental Biology. The long-term goal of my research is to study the mechanisms of hematopoietic stem cell regulation under physiologic and pathologic conditions. I have many years of experience in studying stem cell biology, leukemogenesis, and preclinical evaluation of targeted therapy using mouse models and human samples. During my PhD training at Johns Hopkins University, I worked with Dr. Chi Dang on cell cycle control by c-Myc oncogene. After graduate school, I completed my Residency in Internal Medicine at Washington University, during which time I worked on the role of c-Myc in myeloid leukemogenesis. As a Hematology/Oncology fellow at USCS, I worked with Dr. Kevin Shannon on oncogenic Ras in leukemogenesis. I came to University of Michigan in 2009, first as a Clinical Lecturer and worked with Dr. Sean Morrison on the role of oncogenic Nras in leukemic stem cells. After I started my independent research program, my research has been focused on how oncogenic mutations dysregulate cytokine signaling, cell stress response signaling, cellular metabolism in hematopoietic stem cells (HSC).

Long-term hematopoietic stem cells (LT-HSCs) are a rare population of cells that reside in the bone marrow niche and are at the apex of hematopoietic hierarchy. Like many other tissue-specific stem cells, LT-HSCs largely remain in quiescence at steady state to maintain their self-renewal potential. However, in response to emergencies such as infection or bleeding, HSCs increase their proliferation and differentiate to generate mature blood cells. The self-renewal, proliferation and differentiation of HSC is tightly regulated to sustain life-long blood production. Imbalance of HSC quiescence, proliferation and differentiation can lead to hematopoietic failure or malignancies. Besides, self-renewing LT-HSCs regenerate the adult blood systems after transplantation, which is a curative therapy for many diseases including hematologic malignancies, immunodeficiency, and autoimmune diseases. Thus, understanding the mechanisms that control HSC functions to improve HSC reconstitution capacity after ex vivo expansion has broad implications. Research in our laboratory is investigating many different aspects of HSC regulation including cytokine signaling, protein homeostasis, cellular metabolism and epigenetic regulation. In addition, we are studying how these signaling mechanisms are hijacked by oncogenic mutations during leukemic stem cell transformation, to identify novel therapeutic targets to eliminate leukemic stem cells.

Some ongoing projects in the Li Lab: