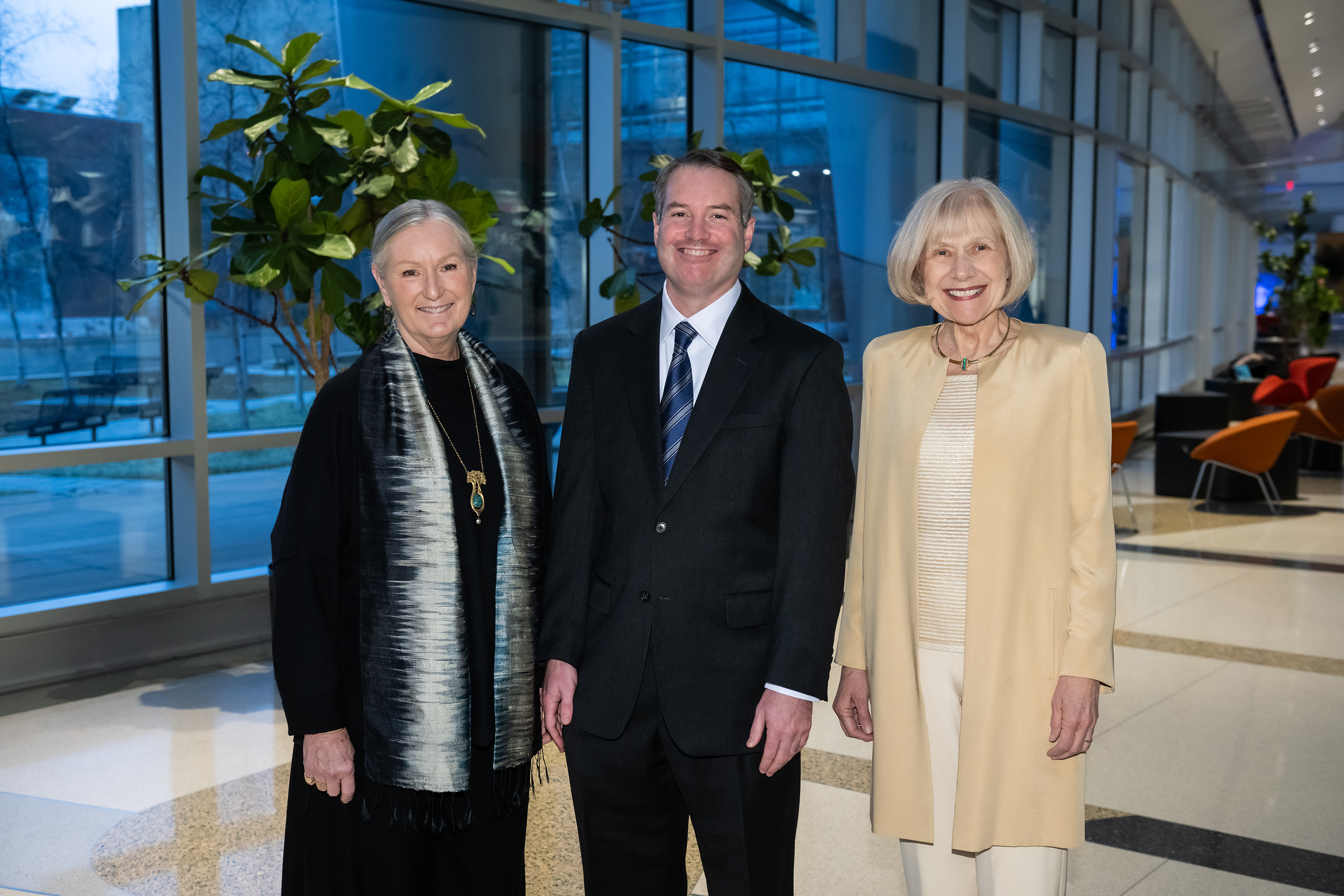 “What you leave behind is not what is engraved in stone monuments, but what is woven into the lives of others.” — Pericles

Fifteen years ago, two connections were made that would prove to be catalysts for the betterment of others in the field of medicine, both anchored by Eva Feldman, M.D., Ph.D., the James W. Albers Distinguished University Professor and Russell N. DeJong Professor of Neurology. 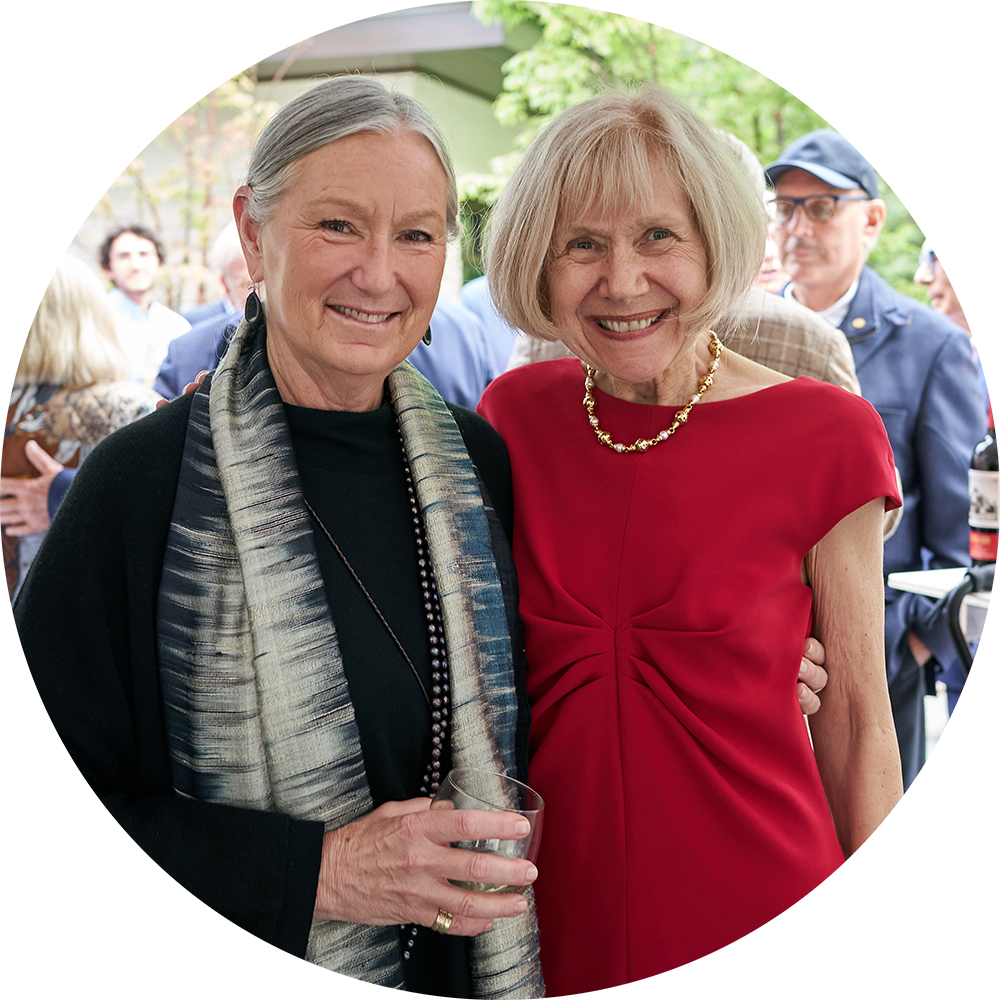 That was when Brian Callaghan, M.D., M.S., embarked on a neuromuscular clinical fellowship during which he met Dr. Feldman and subsequently joined her research group initially as a fellow.

At approximately the same time, Dr. Feldman helped launch the A. Alfred Taubman Medical Research Institute as its inaugural director.  On its founding advisory board was Edith Briskin.  The two became fast friends and created the Taubman Emerging Scholars program with Dr. Valerie Opipari, among other initiatives.  It was the evolution of a program the latter two began prior.

Today, these two relationships converge to celebrate the incredible legacy of Dr. Feldman with the establishment of the Eva L. Feldman, MD, PhD, Professor of Neurology, made possible by the generosity of Edith Briskin.  Dr. Callaghan becomes the inaugural recipient.

“All the work that Eva has done and continues to do in so many areas is truly amazing,” explained Briskin.  “For instance, she spent all those years traveling to California and Atlanta to learn about stem cell science and begin her own stem cell program, while simultaneously working to educate the people of Michigan on the importance of that research. It led to the enactment of an amendment to the state constitution permitting that work.

“But that’s Eva; she never gives up.  I felt that this institution needed to honor her for all that she has accomplished.  This professorship is a way to permanently ensure Eva’s place in the annals of the University of Michigan, which she very much deserves.” 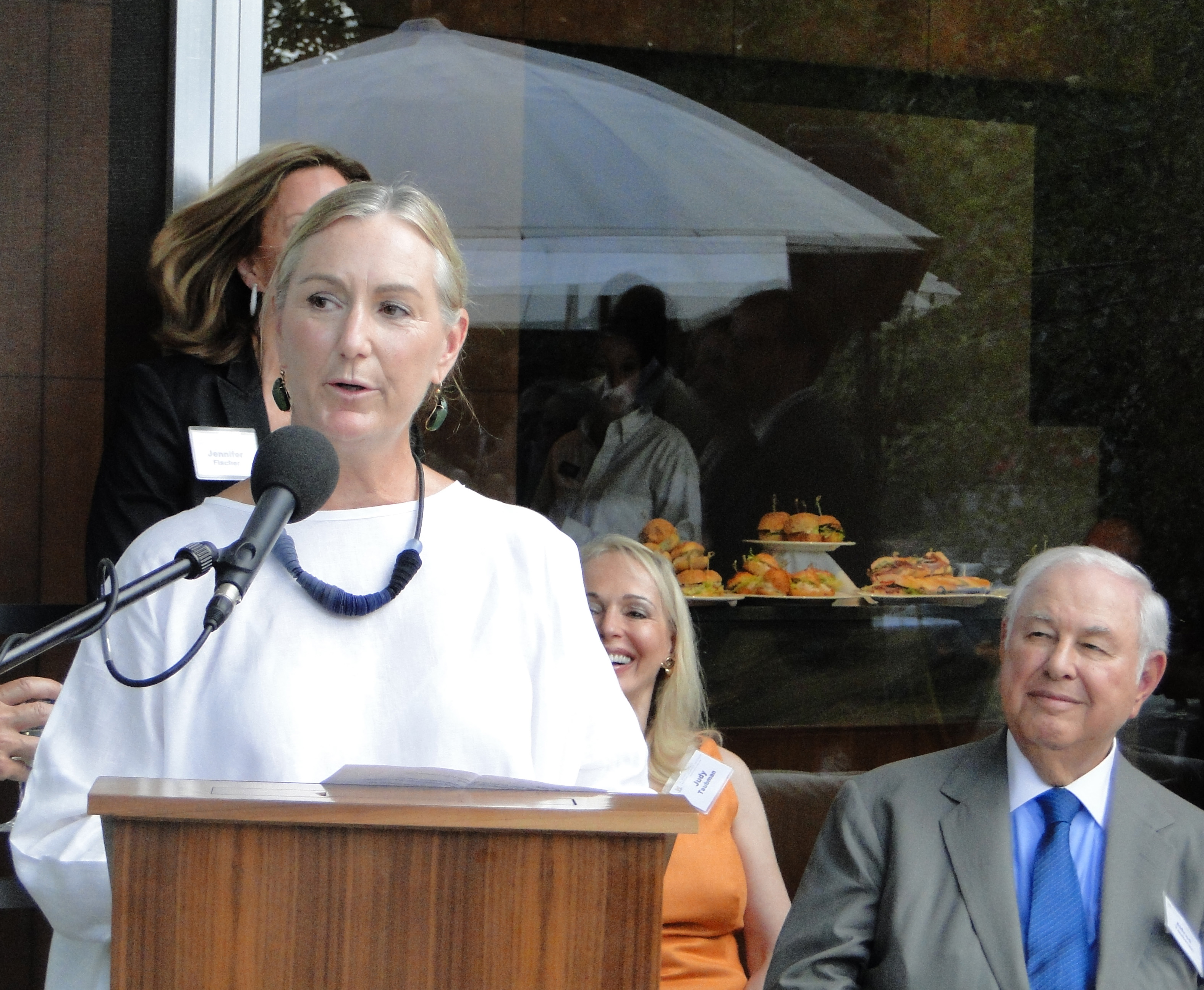 Briskin has a long history of volunteerism and philanthropy in many fields but has shown herself an ardent supporter of medicine and the medical profession.   She quietly works behind the scenes, enriching the lives of faculty and patients – sometimes in disguise. Recently, she received rave reviews for playing Mrs. Claus at Mott Children’s Hospital’s annual holiday festivities.

Besides her abiding love of children, Briskin has been a major champion of diversity and equity in medicine, especially in supporting women at all stages of their careers. At Michigan Medicine, she has funded an incredible 10 scholars and professorships, all of them women up until now.

Dr. Callaghan has a rare honor. He will be the first man to join the team of “Briskin Scholars.”

“Edith is incredibly passionate and has shown time and time again her interest in moving medical science forward,” said Dr. Callaghan.  “She obviously is a strong advocate for women and has named this professorship after Eva, one of the most prominent female researchers at U-M.  Edith’s generosity and caring make her one of the most impressive people I have ever met.

“I am grateful to her, not just for the professorship, but for her confidence in me.”

Dr. Callaghan finds it both exciting and daunting to receive a professorship named after his mentor, Dr. Feldman, and funded by a legendary figure like Edith Briskin. He promises to continue to their inspiring tradition, as an advocate for women in medical science.   In addition to Dr. Feldman, he has worked proudly alongside other women researchers at U-M, including developing the health services research program at Michigan Medicine with Dr. Lesli Skolarus, who is currently at Northwestern University.   Dr. Callaghan now has an “incredible” female mentee himself, Melissa Elafros, M.D., Ph.D., who is beginning to receive accolades for her early-career research prowess. 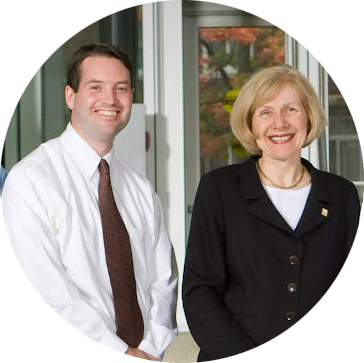 Drs. Brian Callaghan and Eva Feldman when he joined her lab in 2008

Dr. Callaghan knows full well the power of having a good mentor, as he learned from working with Dr. Feldman.

“When I attend meetings with her, Eva goes out of her way to introduce you to everyone.  All of a sudden you have access to connections that she has cultivated over decades, including her long list of former mentees.

“Receiving a professorship named after your mentor of 15 years is a double honor, and who better to have one named after than Eva?”

Why Dr. Callaghan?  Just look at his resume as a clinician scientist.

At U-M, he serves as co-director of the Neuromuscular division at Michigan Medicine and Associate Program Director of Research for the Neurology Residency Program, as well as a staff physician at the Ann Arbor Veterans Affairs Hospital, running its ALS Clinic.  Internationally known for his expertise in peripheral neuropathy, pain management, and healthcare policy, he has produced more than 125 publications.

Dr. Callaghan is especially interested in the role of obesity on neuropathy development and cognitive decline, for which he won the AAN’s Wolfe Neuropathy Research Prize in 2020. The award recognizes an investigator who identifies a new cause or treatment for axonal peripheral neuropathy. Dr.  Feldman, his proud colleague, and mentor called the award, “a true testament to the exceptional work Dr. Callaghan has done to understand how obesity is an independent factor leading to neuropathy for many patients.”

Briskin’s gift, the endowed professorship, will open doors for what Dr. Callaghan termed “really interesting research possibilities” that wouldn’t have been possible otherwise.  He said the professorship will also not only continue Dr. Feldman’s legacy in name, but also in research. “A lot of my research began in part with work that Eva was pursuing.  For example, she was the first person to talk about the connection between prediabetes and neuropathy, which wasn’t a well-accepted concept at the time. Today it is, and my own research has found that obesity is a major factor in the development of neuropathy.

“Now, we are studying the metabolic syndrome and how that affects nerves in your body, including the brain.  I’m still collaborating closely with Eva. I’m doing a lot of the clinical work, and she is doing a lot of the basic science. There is a lot of crosstalk. The Feldman Professorship allows that kind of research to continue and flourish.

There may be only one person happier than Dr. Callaghan:

“I have been fortunate to have a long and satisfying career at one of the world’s leading academic research institutions and to have worked side by side with remarkable individuals, such as Edith and Brian.” Dr. Feldman said. “I am humbled to have a professorship named after me, which is one of the greatest honors a university can bestow.

“And I am eternally grateful that its first recipient will be my mentee, make that my remarkable, truly brilliant colleague, Brian Callaghan. I cannot ask for anything more rewarding.

“When I first met Edith 15 years ago, it was like a ray of warmth and sunshine had entered my life. She and I have become the closest of friends. She is someone I can turn to for guidance and support on questions big and small. I am Brian’s academic mentor and Edith is my life mentor. Now, she has given the ultimate gift any scientist could ask for – a way to ensure that generations of Brian Callaghans have the opportunity to do the best work possible in the interests of medical science and humanity.

“If everyone had an ounce of Edith’s kindness and generosity, the world would be a much brighter place. Lucky us for having Edith in our lives,” Feldman concludes.

For a video of the ceremony, please click here.

Images from the ceremony and reception:

1 of 29
Previous Pause Next