In honor of ALS Awareness Month, the American Neurological Association sat down with Dr. Eva Feldman, a past president of theirs, for a Q&A.  Read it here.

The full Q&A taken from the American Neurological Association website: 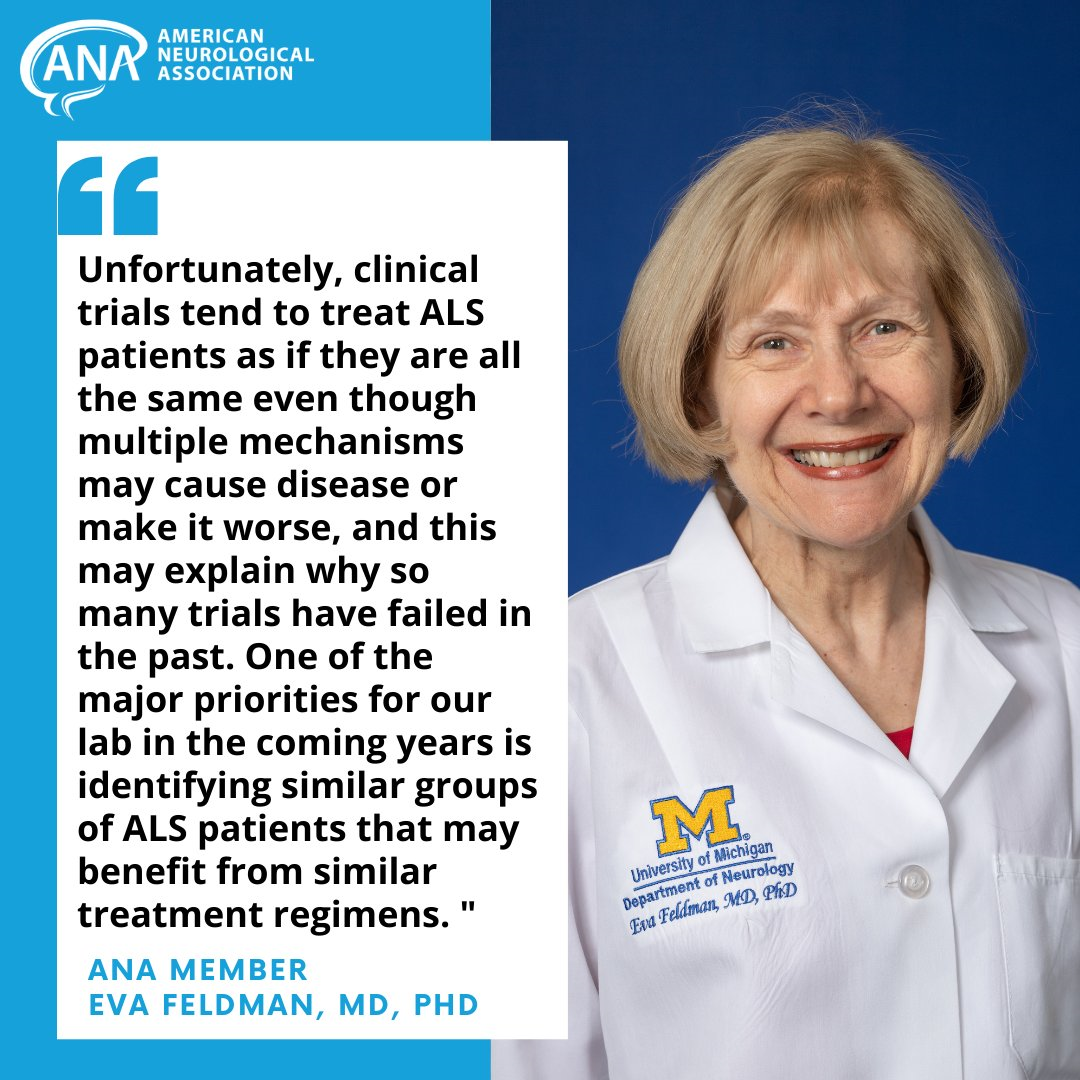 "We initially began examining the role of environmental pollution on ALS because of the high rates of ALS in the state of Michigan. Michigan’s economy has traditionally relied heavily on industries that produce large amounts of pollution such as automotive and defense manufacturing as well as agriculture. The persistent organic pollutants (POPs) generated by these industries can last for decades in the environment and many have been shown to damage human neurons, suggesting they may play a role in ALS. Indeed, we have found that the rates of ALS are higher in areas with high levels of POPs." -Dr. Eva Feldman

This month, ANA talks with Eva Feldman, MD, PhD. Dr. Feldman is the Russell N. DeJong Professor of Neurology and Professor, Neurology at Michigan Medicine, where she also serves as Director of the ALS Center of Excellence and Director of the NeuroNetwork for Emerging Therapies. She discusses ALS and its perception by the public, new therapies, and more.

What does the public need to understand about ALS that it often doesn’t?

ALS is a neurodegenerative disease with no known pharmaceuticals or therapies that significantly change life expectancy. The cause of ALS remains elusive. Roughly 90% of individuals with ALS have no family history of the disease. In the roughly 10% of ALS patients with a possible genetic connection, non-genetic factors are still believed to be necessary to cause disease. Specifically, environmental triggers, superimposed on genetic risk, and cellular changes due to aging are widely believed to play a role in ALS. It is expected that the frequency of ALS will increase 70% by the year 2040. There are no current mandatory reportable registries for ALS in this country, with the exception of the state of Massachusetts, so the true incidence of disease is unknown. There are efforts in numerous other states, including Michigan, to make ALS a mandatory reportable disease.

How are treatment options for ALS different today from 10 years ago?

The approach to ALS patient care has improved over the last decade, in large part secondary to the expansion of multidisciplinary clinics.  In our own Pranger ALS Clinic at University of Michigan, our patients are seen at each visit by three physicians, specifically a pulmonologist, a physiatrist, and an ALS neurologist.  This is combined with visits with our Occupational and Physical Therapists (OT/PT), our Respiratory Therapist, dietician, social worker, and ALS nurse. When appropriate, the patient also sees a speech pathologist and a wheelchair seating expert. Each patient is also given the option to meet our research coordinators who inform patients and their families of clinical trials, biobanks, and epidemiological and environmental research protocols that they may wish to engage in.  Finally, prior to COVID, there was a representative from the ALSA Michigan Chapter in our clinic, although this is temporarily on hold. There is a good description of our clinic on www.umich-als.org.

How is this different than a decade ago?  With the new addition of a pulmonologist, we now start noninvasive ventilator support earlier, which not only improves a patient’s quality of life but also lifespan. The newly added physiatrist can guide the OT/PT directly with improved rehabilitation options for our patient, which again improve the quality of their life and preserve mobility for longer periods of time.  Our ALS neurologist can now offer both riluzole and the newly added approved drug, edarvone, to a patient’s therapeutic regimen.  Importantly, there has been a significant increase in not only clinical trials but clinical trial design, so that working with our Research team, patients have many new treatment and engagement options.

What promising research is poised to change the standard of treatment for ALS?

There are a number of promising treatments currently in clinical trials, including multiple drugs targeting the immune system. Despite the relative lack of viable treatment options for ALS, researchers across the world continue to attack ALS from multiple angles. Drugs such as tofersen are being used to treat ALS patients with specific genetic mutations, whereas the NurOwn regimen is attempting to use stem cells to promote neuronal repair. Recently it was reported that a new drug, AMX0035, may be used to delay disease progression by slowing motor neuron death. In addition to these studies, there are a number of studies examining the efficacy of drugs which modify the immune system. Ravulizumab, part of the CHAMPION-ALS study, is targeting the complement pathway, while several drugs in the ongoing HEALEY ALS platform trial such as verdiperstat and IC14 target immune cell activity. Our own ALS team at the University of Michigan is currently exploring the ability of tofacitinib, a commercially available drug, to suppress immune system damage to the motor neurons.

What work is your lab undertaking to move understanding or treatment for ALS forward?

We initially began examining the role of environmental pollution on ALS because of the high rates of ALS in the state of Michigan. Michigan’s economy has traditionally relied heavily on industries that produce large amounts of pollution such as automotive and defense manufacturing as well as agriculture. The persistent organic pollutants (POPs) generated by these industries can last for decades in the environment and many have been shown to damage human neurons, suggesting they may play a role in ALS. Indeed, we have found that the rates of ALS are higher in areas with high levels of POPs. We also tested the blood of ALS patients and healthy patients and found that ALS patients have increased levels of POPs in their blood, and ALS progresses faster in patients with high levels of POPs than those with low levels. In addition to these studies, we have also examined the exposure of ALS patients to heavy metals such as chromium, nickel, and zinc when they were young and their nervous system was still developing. ALS patients had higher levels of metal exposure during their youth than healthy patients, and exposure to several metals, particularly during teenage years, was associated with the development of ALS.

In parallel to these studies, we are also examining the role of the immune system in ALS. Previous studies in ALS mice have found that targeting specific groups of immune cells can slow or accelerate disease, meaning the immune system can be both protective and destructive in ALS. In our own studies in human patients, we have found that levels of these same immune cells are associated with the rate of ALS progression, suggesting that immune cells can be targeted to slow ALS progression in human patients. Recently, our research group has focused on the involvement of a particular type of immune cell in ALS, the natural killer (NK) cell. NK cells are responsible for attacking unhealthy cells in the body; this can occur when the cells become damaged, when they become cancerous, or when they become infected by viruses. In ALS, NK cell collect in the spinal cord near the motor neurons, they activate other immune cells, and eliminating these cells can slow ALS in mouse models of disease. When these cells are mixed with neurons in a dish (in vitro), they increase the rate of ALS death in ALS neurons.

Therefore, we have begun looking for drugs that can target NK cells in ALS patients and are currently exploring the use of a drug called tofacitinib to block NK cell activity. Not only does the drug reduce the levels of NK cells in the blood but it blocks the ability of NK cells to function properly. We showed this by treating NK cells in vitro and measuring their ability to kill cancer cells, as well as their ability to produce pro-destruction signals. We have found that tofacitinib blocks NK cell activity, reducing both their killing potential as well as their  ability to produce destructive signals. We are currently treating ALS mice with this drug to see whether we can slow disease progression. If we are successful, we will be able to move immediately into clinical trials, as tofacitinib has already been approved by the FDA for use in other diseases.

However, one of the major obstacles to ALS clinical trials is that no two patients are identical. Unfortunately, clinical trials tend to treat ALS patients as if they are all the same even though multiple mechanisms may cause disease or make it worse, and this may explain why so many trials have failed in the past. One of the major priorities for our lab in the coming years is identifying similar groups of ALS patients that may benefit from similar treatment regimens. Already we have found that there are major immune differences between younger and older ALS patients as well as between men and women with disease. In addition, we have begun combining our immune data with our data on environmental pollution and found that patients with high levels of exposure to pollutants have specific immune patterns. These findings suggest that ALS may actually consist of many smaller groups of patients who have a similar-looking disease but different underlying causes. We hope that with an even deeper analysis of patients’ immune system and pollution exposure levels we will be able to match emerging therapies with patients who will actually respond to treatment.

How has ANA supported your career and/or work in this area?

ANA has been incredibly helpful in my career, from when I was a first-year faculty member to this day. ANA is the home of academic medicine and promotes the careers of all clinician scientists. As a young faculty, ANA provided me an environment to meet colleagues and mentors and gain new knowledge and ideas for my work. As my career progressed, I began the junior faculty development course, which has grown and provides young neurologists a roadmap for their early career years. I held multiple positions in ANA, as a Board member, Vice-President and eventually President. These positions provided me the opportunity to meet neurologists and neuroscientists from across the country, and indeed from many different countries, which has enriched my career and allowed me to form connections and relationships with colleagues.

I would not be where I am today without the ANA.

Read the Q&A at the ANA