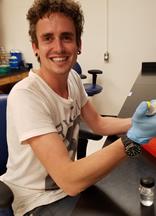 Despite being ranked highly among the most renowned types of symbioses in nature, predator-prey relationships are poorly understood at the molecular level. Foundational research in predator-prey systems has largely focused on charismatic mammals where the behavioral and spatial qualities of interactions are often highly complex, limiting the depth of questions that can be adequately addressed in these systems. By focusing on simpler microbial systems, we can alleviate some of these difficulties and conduct more targeted genetic research in predator-prey systems. To this end, my research is centered on learning more about the genetic elements that determine prey specificity in predaceous fungi that consume small soil animals and protozoans.  The microbial system of interest to me stars Stylopage hadra, a predaceous soil fungus that eats nematodes for dinner. Through targeted analysis of the genomic signature of prey specificity in this uncharismatic and understudied ubiquitous soil fungus, this work will at its heart ask one simple question that remains a central unanswered question in biology: Why do predators like some prey species more than others?