Sally Camper was one of thirteen U-M faculty members elected as fellows of the American Association for the Advancement of Science.

Election as a fellow, a tradition that began in 1874, is an honor bestowed upon AAAS members by their peers. AAAS fellows are recognized for "scientifically or socially distinguished efforts to advance science or its applications."

The awards were announced this week by AAAS. New fellows will be recognized for their contributions to science and technology at the Fellows Forum to be held Feb. 18 during the AAAS annual meeting in Vancouver, British Columbia.

The new fellows will receive a certificate and a blue-and-gold rosette as a symbol of their distinguished accomplishments. Founded in 1848, the AAAS is the world's largest general scientific society and publisher of the journal Science. U-M is third in the number of fellows this year; Ohio State University has 20 and Vanderbilt University has 14. 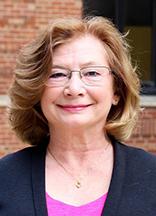