Please join us for the dissertation defense of Jacqueline Quigley from Dr. Jill Becker's lab. Her Ph.D. thesis is titled : "Sex Differences in the Role of GPER1 in the Dorsolateral Striatum on Motivation and Reward." 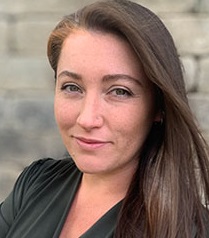 There are sex differences in susceptibility to psychostimulant addiction, supported by clinical evidence and pre-clinical research models. In rodent models, female rats acquire a preference for cocaine at lower doses, escalate self-administration behaviors more rapidly, and are more motivated to attain cocaine than males. These heightened addiction-like behaviors in females are modulated by the presence of the gonadal hormone estradiol. The role of estradiol in regulating male drug-seeking behaviors remains unexplored.

In females, estradiol enhances the rewarding and motivating properties of psychostimulants by potentiating drug-induced dopamine release in the dorsolateral striatum (DLS), a brain region implicated in mediating habitual drug-seeking. While ERα, ERβ, and GPER1 are all localized in the dorsal striatum, the majority of research investigating how estradiol alters behavior, in either sex, has focused on ERα and ERβ and not GPER1. The goal of this dissertation is to fill this gap by investigating the role of GPER in the DLS in mediating addiction-like behaviors in both males and females.

In chapter II, the effects of activation or blockade of GPER1 on preference for rewarding stimuli are investigated. In males, GPER1 bi-directionally modulates cocaine preference: activation of GPER1 attenuates cocaine conditioned place preference and inhibition of GPER1 enhances it. GPER1 activation also attenuates males’ preference for saccharin solution, suggesting that the effects of GPER1 on reward modulation are not constrained to drugs of abuse. Interestingly, there are no behavioral consequences of GPER1 activation on cocaine or saccharin preference for females. Levels of ERα, ERβ, and GPER1 in the dorsal striatum are also explored in this chapter. While there are no sex differences in estradiol receptor expression, relative mRNA levels of GPER1 are greater than both ERα and ERβ, for both sexes.

These are among the first studies to identify a novel role for estradiol receptors mediating reward in males. While estradiol increases females’ susceptibility towards addiction, activation of GPER1 may be protective against the rewarding effects of drugs of abuse for males. Together, these studies are yet another example of why sex should be considered as a biological variable in experimental research, as it will lead to the sex specific therapeutic targets for disorders, such as addiction.