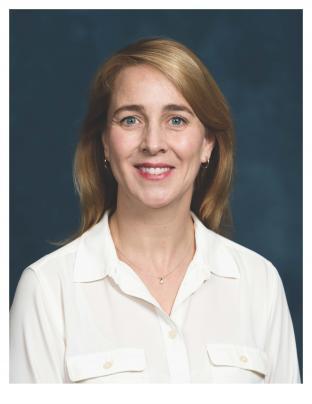 Dr. Sharkey received her PhD in Neuroscience in 2004 at the University of Wisconsin-Madison where she studied the molecular mechanisms of benzodiazepine action at the GABA-A receptor in Dr. Cynthia Czajkowski’s laboratory in the Department of Physiology. Following her doctoral training, Dr. Sharkey moved to the Scripps Research Institute in San Diego, CA where she completed her first postdoctoral fellowship under the mentorship of Dr. Tamas Bartfai, Professor and Chair of the Molecular and Integrative Neurosciences Department (MIND). While at Scripps, Dr. Sharkey investigated the effect of the neuropeptide, galanin, on GABAergic neurotransmission. In 2007 she decided to pursue additional postdoctoral training with a stronger focus on neurological disease. She joined Dr. Miriam Meisler’s laboratory at the University of Michigan where she was awarded the Center for Genetics in Health and Medicine Postdoctoral Fellowship Award to study mutations in the voltage-gated sodium channel, Nav1.6 and their contributions to neurological disease.

In 2012 Dr. Sharkey was promoted to research faculty in the Neurology Department at the University of Michigan where her research program is focused on understanding the molecular mechanisms and physiological consequences of protein mis-folding in neurodegenerative disease. She studies a family of brain-expressed ubiquitin adaptor proteins, the ubiquilins (UBQLN1, 2 and 4), that help maintain neuronal protein homeostasis. One family member, UBQLN2, is a common participant in numerous neurodegenerative diseases including amyotrophic lateral sclerosis (ALS) and frontotemporal dementia (FTD). Dr. Sharkey’s research seeks to answer multiple outstanding questions about UBQLN function including 1) how disease mutations in UBQLN2 alter its liquid-liquid-phase separation (LLPS) behavior and contribute to neurotoxicity 2) under what conditions UBQLN2, normally a cytoplasmic protein, translocates to the nucleus and what role it plays there 3) how does RTL8C, a novel UBQLN2 interacting protein regulate UBQLN2 behavior, and 4) why we have three highly homologous UBQLNs expressed in the brain and what homologue-specific roles they play in health and disease.

In addition to her focus on UBQLN function, Dr. Sharkey is also interested in understanding how defects in neuronal protein quality control pathways contribute to declines in cognitive health caused by normal aging or neurodegenerative disease. The National Institute of Aging’s Mouse Intervention Testing Program has identified several drug or diet treatments that significantly extend lifespan in mice, however it is unknown whether the increases in lifespan correlate with increases in “cognitive health span”. Dr. Sharkey recently began studying the effect of these anti-aging drug and diet treatments on brain biology with an interest in identifying pathways through which these drugs may impact neuronal health and protein quality control pathways.