Kellogg Eye Center and Michigan Medicine recently welcomed eye hospital leaders from around the globe as the World Association of Eye Hospitals (WAEH) brought its annual meeting to the United States for the first time. 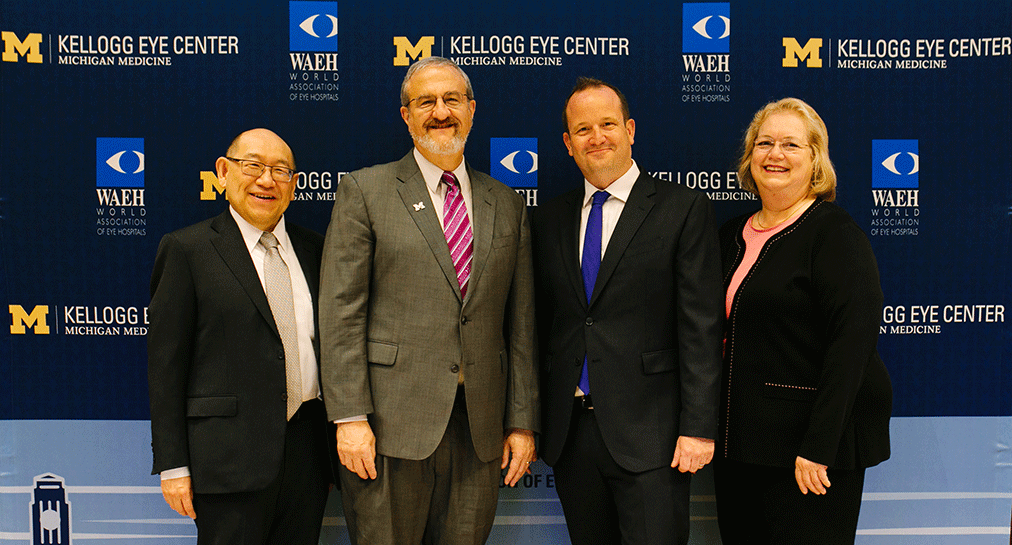 The four-day event, June 6-9, attracted nearly 200 ophthalmologists and top-level administrators from six continents, the largest group in the history of WAEH. Sessions focused on innovation, fundraising, patient safety, and the day-to-day operations of running an eye hospital. It was organized through the Kellogg Eye Center for International Ophthalmology; Kellogg was the first US hospital to join WAEH in 2015 through partnerships begun by faculty and trainees engaged in various international collaborations.

“This has really grown out of the International Center, culminating in this meeting which showcased Michigan Medicine and what a jewel we have here hidden the Midwest,” said Professor of Ophthalmology Christine Nelson, a co-Director of the International Center, who was instrumental in bringing the event to Ann Arbor. Previous meetings have been held in large metropolitan cities including Tianjin, Mexico City, Singapore and Rotterdam.

“For us to host the first US meeting, to be able to show off our campus and feature some of our distinguished faculty in the program, it really puts Kellogg Eye Center out front on the international stage,” Nelson said.

Attendees had the opportunity to tour both Kellogg Eye Center and the broader medical campus. The program featured presentations from U-M faculty and leadership including MCity Deputy Director Carrie Morton (on building collaborative teams), UMMS Associate Dean for Regulatory Affairs Raymond Hutchinson (in industry/academia relationships), and U-M Clinical Professor of Engineering (and former NASA astronaut) James Bagian (on patient safety). University President Mark Schlissel was on hand to give opening remarks for the meeting kick-off. 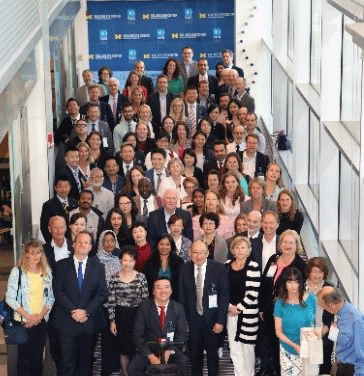 “Here at Michigan, we take great pride in our commitment to collaborate both within our university and across national borders. I believe the successes of our world’s greatest institutions will be measured in part by our ability to work together and leverage our strengths in service of the public good,” Schlissel said. “The biggest problems we face as a society don’t conveniently set themselves up to be knocked down by one-source solutions.”

Among the unique aspects of the WAEH meeting is its broad focus, which includes administration and operations as well as some academic medical research. In addition to tele-ophthalmology and robotic surgery, there were sessions on workplace culture, philanthropy and fundraising, staff training programs, finance models, and more.

“It was a terrific event and a wonderful exchange of ideas. I learned a great deal because so much of the content pertained to operational aspects that, as a physician, I am rarely directly involved in,” said Professor of Ophthalmology and Visual Sciences Jonathan Trobe, MD, co-Director of International Programs at Kellogg Eye Center.

Attendees hailed from nearly 20 countries, including first-time WAEH delegates from Saudi Arabia and Kenya. It was the largest, most diverse group ever involved in WAEH and the largest group ever hosted at Kellogg Eye Center, said International Center Administrative Director Donna Donato, the event’s primary organizer.

“Culturally, it’s such a valuable exchange because everyone is open to discussing their difficulties and potential solutions, and you realize that so many of us are struggling with similar challenges,” Donato said. “We can learn a lot from the innovation and ideas of colleagues from other countries. That’s what this meeting was all about.”

Next year’s event will take place at Moorfields Eye Hospital in London.