The Bernardo Streiff Gold Medal is awarded by the Academia Ophthalmologica Internationalis every four years to an ophthalmologist who has contributed most to the advancement of ophthalmology. 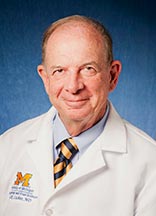 The Bernardo Streiff Gold Medal is awarded by the Academia Ophthalmologica Internationalis every four years to an ophthalmologist who has contributed most––through history, ethics, and education––to the advancement of ophthalmology. Professor Bernardo Streiff (1908–1988) was head of the University Eye Clinic, Lausanne, Switzerland. An ophthalmologist of exceptional international stature and author of 300 scientific publications, he concentrated near the end of his life on history and ethics as contributions to the advancement of ophthalmology.

Dr. Lichter became assistant professor of ophthalmology at the University of Michigan Medical School in 1971 and established the Department's first glaucoma service. He was appointed professor and chair in 1978, a post he held until 2012.

Under his leadership, Dr. Lichter oversaw creation of the 80,000 square foot W.K. Kellogg Eye Center, which was completed in 1985. A 230,000 square foot expansion, dedicated in 2010, elevated the stature of the Kellogg Center into one of the world's finest ophthalmology facilities and programs.

He is past editor-in-chief of the journal Ophthalmology and has nearly 400 publications to his credit, including scientific articles, editorials, abstracts, and book chapters. He has delivered over 40 named lectures, including the 50th Edward Jackson Memorial Lecture. He includes among his many honors, the prestigious Howe Medal from the American Ophthalmological Society.