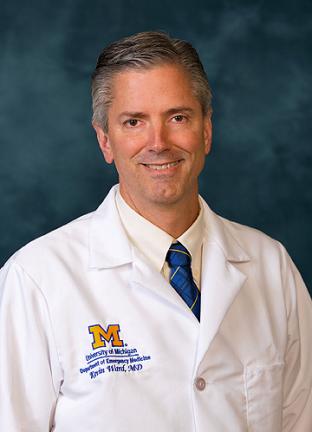 Dr. Ward’s research interests span the field of critical illness and injury ranging from combat casualty care to the intensive care unit. His approach is to develop and leverage broad platform technologies capable of use throughout all echelons of care of the critically ill and injured as well as in all age groups.  Dr. Ward’s work has been funded by the NIH, Department of Defense, NSF, and industry.   He has published over 200 peer-reviewed articles and book chapters.

Dr. Ward’s passion is in creating programs which encourage true integration across the disciplines of medicine, engineering, data sciences, and entrepreneurship that accelerate discovery to true patient impact.  In addition to founding MCIRCC, he led the design and implementation of Michigan Medicine’s Fast Forward Medical Innovation (FFMI) program and served as its inaugural Executive Director from 2013-2018.  He is a serial innovator and entrepreneur in the field of emergency and critical care medicine and the recipient of Innovation and Commercialization awards from Virginia Commonwealth University, the University of Michigan Medical School, and the Department of Defense.

In collaboration with the U.S. Army and its Joint Special Operations Training Medical Center, Dr. Ward developed and medically directed special training programs, which have been responsible for providing clinical training to over 1000 Special Operation Combat Medics.  For this work, Dr. Ward was awarded a Certificate for Patriotic Civilian Service by the Department of the Army and the Joint Special Operations Training Center.  Severing on numerous editorial and review boards in the field of resuscitation, emergency and critical care medicine, Dr. Ward also serves on the executive committee for the Trauma Hemostasis and Oxygenation Research (THOR).