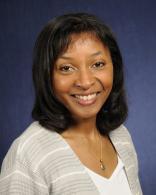 Dierdre Jeske is Administrative Assistant Senior for the Department of Learning Health Sciences in the Division of Professional Education since Oct 2015. For five years prior, she provided support to faculty doctors (surgeons, endocrinology, pediatric, and general ophthalmologists—all researchers as well as practicing physicians) in the plastics, pediatric, and general divisions of the Department of Ophthalmology.

Her past experience includes military service as a Spanish cryptologic linguist in the United States Air Force stationed at a naval base in Key West, Florida. Twenty-two years ago in Key West, she met and married her husband, then an airborne Russian linguist for the Air Force. Dierdre earned an associate’s degree in general studies from Florida Keys Community College-Florida and a medical transcription certificate from Everett Community College-Washington. Currently she is pursuing a bachelor’s degree in business from UM-Flint.

A self-described army brat, her father is a retired army colonel. She has six brothers and no sisters, a pattern she is close to repeating with her own children. She has four sons and one daughter who never cease to amaze with their creativity, sense of humor, and talent.